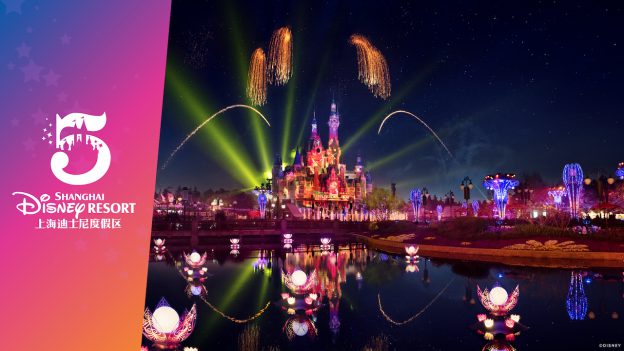 Just yesterday, our friends at Shanghai Disney Resort launched their 5th Birthday Celebration, the Year of Magical Surprises. As part of that occasion, they recently unveiled “Magical Surprise,” an all-new song capturing the theme of the special celebration. I got to discuss how this song came to be with Yaron Spiwak, Senior Music Producer & Creative Director at Walt Disney Imagineering. Here are some excerpts from our conversation:

Who were the song writers and how were they chosen?

Yaron: The song was written by Chris Sernel, an American recording artist and Grammy-nominated producer who worked with us on a song for a previous project, and Jeff Lewis, a songwriter for films and a contestant on season 4 of “The Voice.” It was co-produced by Jeff, Chris, Leo Shahar and myself. The song was written and submitted in English first but was adapted by the local team to a Mandarin version that kept the same spirit and message as the original.

Here is a clip of the Mandarin language version released by Shanghai Disney Resort and sung by Liu Yuning:

Here is the English demo version of the song that was initially submitted to us and sung by Jeff Lewis:

What direction did you give to the songwriters based on any conversations you had with Shanghai Disney Resort about what the 5th birthday song should be about?

Yaron: Shanghai Disney Resort requested a contemporary song that reflects the current music market, as Shanghai is a very modern city, and we loved the idea of a song with a Pop sound. The team wanted to capture the park’s identity and incorporate some classic Disney magic, which I think we ultimately achieved!  This year’s campaign is the Year of Magical Surprises, which features many surprise activities and offerings throughout the park. The song references the magical surprises that guests and families can experience together only in our parks.

How would you describe the song’s theme or message?

Yaron: We wanted a song that is contemporary but could be easily adapted to parades, stage shows and as a single on the radio. We also knew that we wanted a solo singer for it with a lot of group vocals throughout. One of the reasons we picked this song was because of the clever way the crowd answers to the singer “Surprise!” (almost like in a surprise birthday party) on the choruses. In meetings, sometimes that’s how we referred to the song – by shouting “Surprise!” to one another.

How is it being used at the resort?

Yaron: We worked closely with Shanghai Disney Resort’s Entertainment team and their leader Denny Newell, as well as the Marketing team to make sure the song drives the message that it needs to, but at the same time stays musical. There are actually many versions of the song you will be able to hear in the park during the Year of Magical Surprises, from the use of an instrumental version of the song in a fun wand toy, to the Disney “Surprise!” Show at the Pepsi E-Stage in Tomorrowland and during the Magical Surprise Pre-Parade, with additional “Magical Surprise” versions to come.

Where was the song recorded and did you face any logistical challenges?

Yaron: This project began in May 2020 at the height of the COVID pandemic and has been a blessing for both us and the Shanghai Disney Resort team to collaborate on, as it brought a lot of joy and healing energy through music and art. Because of pandemic-related logistical challenges, the music was recorded all over the place. Some of the guitars and vocals were recorded in Los Angeles and some in China, while the brass was actually recorded in Washington, DC.  During this time, a lot of musicians taught themselves how to record at home, and used various audio and video programs so that we were able to participate in recording sessions and produce remotely.

How was Liu Yuning chosen to be the celebrity singer of this song and what can you tell me about him?

Yaron: It was another great collaboration with the Public Relations and Celebrity Engagement team of Shanghai Disney Resort. Liu Yuning is a very successful pop singer with the boy band Modern Brother in the local China market and his voice was ideal for this type of song.

This song is really fantastic! How do you feel it turned out?

Yaron: We couldn’t be happier and the guests seem to love it as well. I really hope this will become a Disney park favorite! It can be a challenge to keep the classic Disney magic while adding some contemporary spices and flavors to it! I feel very lucky to have helped create music for such a special occasion!

What do you hope that listeners will feel when hearing this song?

Yaron: I hope listeners will feel the spirit of Disney and the park through the song, and will also listen to it at home to remind them of their great experience at Shanghai Disney Resort. I also hope that the Chinese listeners will appreciate the authenticity of the song and performance and will ask for more!