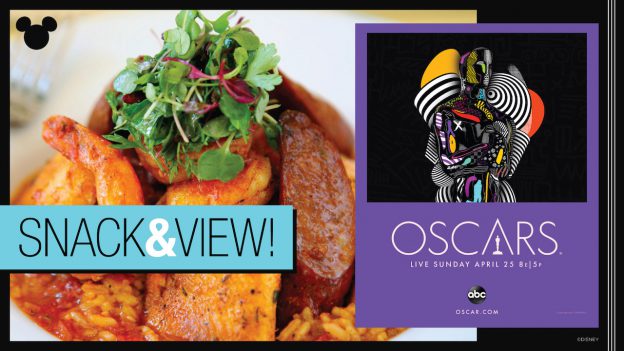 The Oscars have finally arrived! Tomorrow, Sunday, April 25 at 8:00 ET|5:00 PT on ABC the Academy of Motion Picture Arts and Sciences will honor the movies released in 2020 and bring a little bit of glitz and glamour back to Hollywood.

For my family, Oscar night is an occasion to put our cooking skills and wits to the test. It’s the ultimate contest to see who can best tantalize the taste buds and craft the cleverest movie-themed recipe name. After all, I love a good food pun!

This year, the Walt Disney Company has earned 15 Oscar nominations, so I thought to combine my movie love with my love of all the delicious food from the Disneyland Resort. With a little help from my friends in the Disney Parks Kitchens, we’ve pulled a few recipes out of the vault and from some of the soon-to-reopen eateries around the resort.

And the Oscar goes to …

Right off Route 66 you’ll find Flo’s V8 Café in Cars Land at Disney’s California Adventure park. A detour with this out-of-the-vault recipe for Veggie Tater Bake will take you all the way to NoMeatLand (because it’s vegetarian!). Inspired by Searchlight Pictures’ “Nomadland” nominated for six awards including Best Picture.

This year, no Oscar party would be complete without a little Soul food. Tap your toes and taste buds to the tune of Joe-balaya Gardner. A classic Jambalaya recipe from the Blue Bayou Restaurant inspired by Disney and Pixar’s “Soul” nominated for three awards including Best Animated Feature.

For dessert, we’ve got you covered with this delicious recipe from the vault for Cookies ‘n Cream Bread Pudding from the Pacific Wharf Café in Disney’s California Adventure park. This is sure to settle the sweet-tooth of any Moo-lan fan and bring honor to any potluck. Inspired by Disney’s “Mulan” nominated for two awards including Best Costume Design and Best Visual Effects.

Share your movie-themed recipe names in the comments below and don’t forget to watch the Oscars on ABC.

Exclusive red carpet coverage begins Sunday, April 25th at 6:30 ET|3:30 PT, immediately followed by the awards ceremony at 8:00 ET|5:00 PT. Watch live on ABC or stream the Oscars at abc.com or on the ABC app.