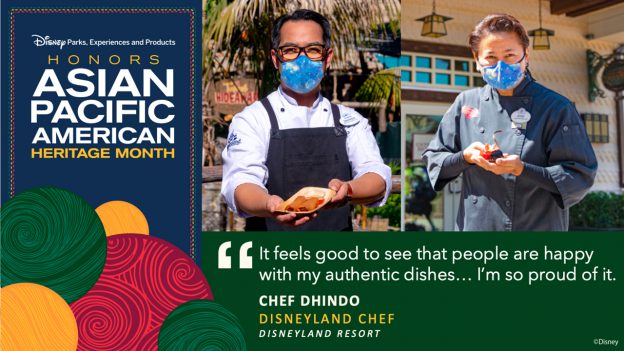 Whipping up authentic Filipino food has been a family tradition for Chef Dhindo who began cooking at a young age. Growing up in the Philippines, it was his mother’s dream to open a restaurant of her own. When she did, young Chef Dhindo hopped into the kitchen and soon discovered his own talents, creating many of the restaurant’s popular specials.

When Chef Dhindo later moved to the U.S. with his family, he followed his natural talents and completed culinary school, eventually landing a job at Disneyland Resort. Over the last 10 years, Chef Dhindo has helped create tasty offerings across the resort, from opening Red Rose Taverne in Fantasyland to his current spot at Blue Bayou Restaurant, which recently reopened at Disneyland park. Over in Adventureland, he also helped open Tropical Hideaway, a jungle oasis offering creative dishes inspired by Polynesia and the Pacific Rim like the Loco Moco Bao, Traditional Pork Lumpia and Sweet Lumpia.

“I wanted to make sure that we are serving the right things,” said Chef Dhindo, who with the culinary team, created recipes for lumpia based on his experience growing up in Manila. “I wanted this to be like when you go to the Philippines and you ask for lumpia, this is what you’re going to get. So we definitely tried to make them as authentic as possible.”

Getting the recipes just right took the team about a year, from sourcing the right ingredients to testing different flavors and seasoning combinations. “We dissected everything and would go from there, back and forth until we nailed it.”

As it turns out, the guest response to these offerings was even better than Chef Dhindo and his team expected. “It feels good to see that people are happy with it… I’m so proud of it.”

Chef Dhindo was also instrumental in the creation of the Loco Moco Bao, a play on the famous Hawaiian Loco Moco dish of spam, eggs and rice.

“We try our best to come up with as playful, authentic and well-themed items as possible,” he said… which can be challenging when you’re cooking for thousands of guests each day, but Chef Dhindo and the Disneyland Resort Chefs embrace the possibilities when imagining unique dishes for our guests.

Originally from Bangkok, Thailand, Chef Jessi has been a Cast Member at Walt Disney World Resort for over 30 years and has worked at many our Disney Resort hotels including Aulani, A Disney Resort & Spa in Hawaii, Disney’s Grand Floridan Resort & Spa, Disney’s Animal Kingdom Lodge and more throughout her career.  Jessi grew up aspiring to be a Disney Animator and changed her career path when one of her mentors taught her how to turn her passion for creativity into the culinary arts.

Today, Chef Jessi has mastered her craft and helps create beautiful cakes and pastries at Disney Springs as well as designing and building specialty limited-time desserts and holiday displays.

Throughout Asian Pacific American Heritage Month, Chef Jessi has been sharing her culture through her own dessert, a Jasmine Tea Cream Tart celebrating her favorite Asian teas and flavors. The dessert is beautiful mix of colors and flavors including lychee – a key ingredient from her culture and one she is excited that guests will get to experience. Chef Jessi shares, “When guests try my dessert, I hope they enjoy the refreshing flavor of lychee, the tea, and the beauty of jasmine flower that has been in our culture for a long time.” See how Chef Jessi celebrated her culture through food like her Jasmine Cream Tart in the video below: