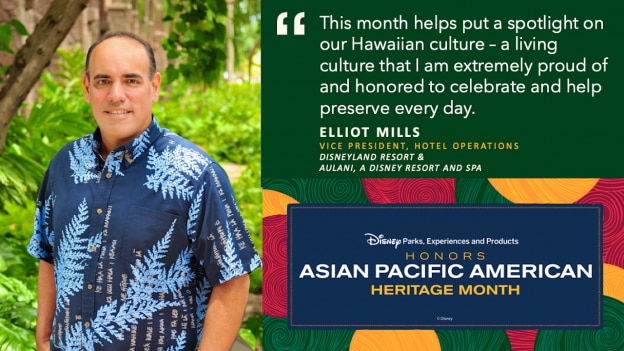 Today, we’re honored to introduce you to Elliot Mills, Vice President, Hotel Operations for Disneyland Resort and Aulani, A Disney Resort & Spa, and share how the Hawai’i-native uses his passion for ho‘okipa (hospitality) and the Hawai‘i community to uphold Aulani Resort’s dedication to celebrating Hawaiian culture.

Elliot began his Disney career in 2010 as an integral leader in the opening of Aulani Resort, helping to develop the culture and values in which Aulani Resort cast members thrive. For nearly 10 years, this resort has been dedicated to celebrating Hawaiian culture and heritage, while providing a touch of Disney magic to all who visit.

Elliot is considered a true pillar in the Hawai‘i travel industry, having worked in resort management for more than 25 years. Prior to joining Disney, he held various executive and resort management positions on the islands of Kaua‘i, Maui and O‘ahu. Under Elliot’s leadership, Aulani Resort has received several prestigious industry awards and recognitions such as the Best Family Hotel in the USA in the 2020 U.S. News & World Report best hotels ranking. In 2018, the Hawaii Tourism Authority also recognized Aulani Resort with its highest honor – a Tourism Legacy Award – for its efforts to revitalize and normalize Hawaiian language usage in everyday life.

He gives back to the Hawai‘i community through service as a board member for Hawai‘i Pacific Health, HMSA, the Hawai‘i Community Foundation, and currently serves as Chairman of the Board for the Hawai‘i Visitors and Convention Bureau. Elliot is also on the Board of Trustees for Kamehameha Schools, which was created by Princess Bernice Pauahi Bishop – the last royal descendant of King Kamehameha – to provide educational opportunities and improve the well-being of people of Hawaiian ancestry.

“Since my first role in hospitality as a valet, I’ve taken great pride in the responsibility we have as hosts to share the gifts that Hawai‘i has to offer,” said Elliot. “The true magnificence of our island home is rooted in our culture, and I am honored to work alongside dedicated individuals who help showcase this culture every day. Whether they are discussing Aulani Resort’s collection of contemporary Hawaiian art or sharing the legends of the demi-god Maui, our people and their own aloha, experiences and mo‘olelo (stories) are our greatest asset.”

One of Elliot’s favorite places at the Aulani Resort is The ‘Ōlelo Room, which celebrates the Hawaiian language. “My fellow Aulani cast members are a wonderful representation of this culture. For example, some cast members in The `Ōlelo Room are fluent in Hawaiian and share their language to immerse guests even further into our unique culture. Next time you visit I recommend stopping by to spend time with our ‘ohana (family) to learn some key phrases. The Cast will be sure to share a warm mahalo (thank you.)”

“Asian Pacific American Heritage Month helps put a spotlight on our Hawaiian culture – a living culture that I am extremely proud of and honored to celebrate and help preserve every day,” Elliott says. If you would like to learn more about the creation of Aulani Resort, Go Behind the Magic of Aulani, A Disney Resort and Spa – and for more stories, follow along on our Disney Parks, Experiences and Products social handles; Instagram: @DisneyParksBlog, Twitter: @DisneyParks, and Facebook: @DisneyParksBlog.