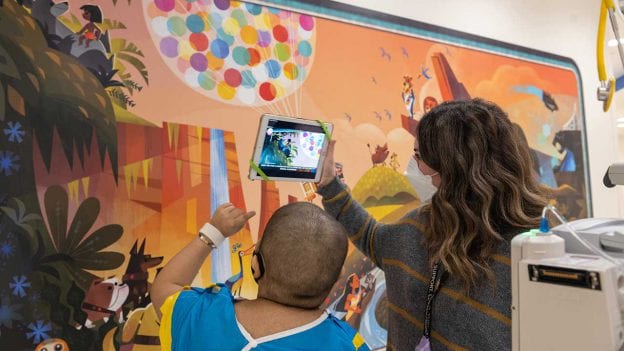 Former ‘CHOC Kid,’ Imagineer Helps Bring Smiles to Patients at Children’s Hospitals Ahead of the Virtual CHOC Walk on May 22

Katie Barnes, a senior set decorator at Walt Disney Imagineering, jumped at the chance to work on art direction and installation of interactive Disney artwork designed to ease the stress for children and families at children’s hospitals around the country.

When she found out her first project would be at CHOC (Children’s Hospital of Orange County) — the hospital where she spent much of her own childhood — she knew it was meant to be.

“The first time I walked in, the memories came flooding back,” said Katie, who was diagnosed with a rare kidney disease and spent about seven years in and out of CHOC for testing and treatment, beginning when she was just 18 months old. “The idea that I would have the opportunity to be part of bringing smiles and positivity to not just the children here who are going through such a difficult time, but also to the families and the staff, well, it’s just really special.”

The project is part of the Company’s $100 million philanthropic initiative to reimagine the patient journey in children’s hospitals. Teams from every line of business across The Walt Disney Company, including Walt Disney Imagineering, came together to deliver solutions that are simple for hospitals to implement, sustain and scale. In collaboration with Disney’s Enterprise Social Responsibility group, Imagineers work with hospitals to enhance the hospital environment by introducing visually stunning murals (as long as 54 feet at CHOC) of favorite characters that brighten corridors and come to life when viewed through the Disney Team of Heroes app. Other elements include magic windows, magic art, and play spaces that draw the patients into the enchanting world of Disney storytelling; Disney-themed Starlight Gowns and care packages inspired by favorite characters; complimentary access to movie and TV content through the Disney Movie Moments program, Disney+, and DisneyNOW apps; and children’s hospital-centered Disney Institute training and themed staff badges to enhance the engagement between the patients and care givers.

Disney’s commitment to children’s hospitals, and CHOC, in particular, dates back to 1960 when Walt Disney joined a committee to help open the hospital. The Disneyland Resort continues to sponsor the hospital’s major annual fundraiser, CHOC Walk in the Park, which has raised millions for healthcare programs, education and research for children in Southern California. The resort has contributed to major construction and additions to the hospital over the years, often brings Mickey Mouse and other characters to the hospital to visit patients, and together with Pixar, created the interactive “Turtle Talk” show in the hospital’s lobby, providing moments of joy for CHOC patients and families.

While Katie has warm memories of being a patient at CHOC — she still has her stuffed Choco bear — she doesn’t need to imagine how much brighter her days would have been if she’d been able to see favorite Disney characters during her stays. “During installation, kids and staff would stop and say, ‘Whoa — there’s the Incredibles! Whoa — that’s Star Wars!’ The emotion these characters trigger and the change in attitude is immediate and so gratifying.” In fact, Katie’s connection to the project goes even deeper; the program is also at Children’s Hospital Los Angeles, where Katie says her 6-year-old daughter goes for treatment of the same kidney disease Katie has.

“I get to experience this as a designer, as an Imagineer and through the memory of what I went through,” she said. “But to get to experience it from the eyes of a parent and see my daughter’s enthusiasm and smiles, well it makes the magic of what we do that much stronger.”

Get involved in the virtual CHOC Walk

This year’s event is being held this Saturday, May 22 in a virtual format. Visit chocwalk.org to learn how you can get involved.

See some of the Disney artwork installations at CHOC in action:

Likes (9)
Share Former ‘CHOC Kid,’ Imagineer Helps Bring Smiles to Patients at Children’s Hospitals Ahead of the Virtual CHOC Walk on May 22