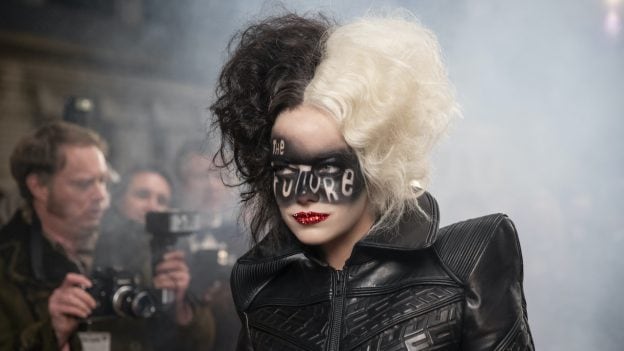 To continue the #HalfwaytoHalloween celebration, we’re excited to see a new look at the most notoriously fashionable character, Cruella de Vil. Disney’s newest film “Cruella” explores the fascinating tale of how a gifted, nonconforming young girl named Estella evolved into the stylish villain Cruella we fear yet love today.

As another exclusive for Disney Parks Blog fans, we’re excited to debut five new posters featuring an assortment of characters from the film with the first seen here, of Academy Award® winner Emma Stone as the legendary Cruella de Vil.

Introducing Cruella’s nemesis, the elegant, abrasive and wicked Baroness von Hellman. Played by two-time Academy Award®– winner Emma Thompson, the Baroness is the opposite of Estella in every way.

And stay tuned to the Disney Parks Blog for more information about a special limited time “de Vil-ishly fantastic” photo op “rolling” into the Disneyland Resort “down the road.”

“Cruella” releases simultaneously in theaters, including AMC DINE-IN Disney Springs 24 and on Disney+ with Premier Access on May 28th. Additional Fee Required.