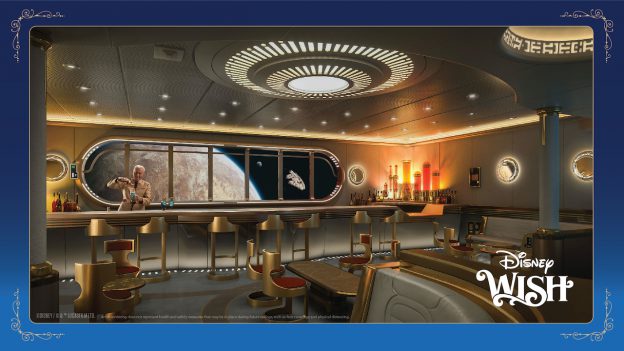 May the 4th be with you! Those of you who’ve met me know I am a huge Star Wars fan (you can read more about that in the recent interview I did for StarWars.com!) So as a Walt Disney Imagineer, getting to work on projects that bring Star Wars to life on board our cruise ships and in our theme parks and resorts is a dream come true for me.

And now, I can finally talk about the project I’m currently working on – Star Wars: Hyperspace Lounge – coming to our newest ship setting sail summer 2022. We gave you a first look at this incredible space in our grand reveal of the Disney Wish last week, and today I want to share more details about this first-of-its kind Star Wars-themed space for adults on a Disney ship.

That’s right parents … It’s not just your kids who get to have all of the fun! Every evening, this high-end bar styled as a luxurious yacht-class spaceship is reserved exclusively for adults. For the first time on one of our ships, you can embark on a space-jumping tour of the Star Wars galaxy with interactive tasting experiences and signature beverages inspired by the films.

The venue’s sleek interior design and metallic detailing is inspired by lavish star cruisers similar to Dryden Vos’ ship in “Solo: A Star Wars Story.” While you sip your galactic concoctions, this space-faring voyage will transport you to iconic locations from the eras of the Republic, Empire and First Order, employing hyperspace jumps to travel from planet to planet while sensational scenes unfold just beyond the ship’s panoramic viewport at each stop.

Ranging from serene vistas to action-packed encounters, the spectacles seen through this virtual “window” into the galaxy will feature famous space ships from the films and fan-favorite locales like Batuu, Tatooine, Mustafar and Coruscant. The experience will be amplified by surround-sound audio and a holotube that presents holographic models of nearby ships.

While we’re talking Star Wars, did you know that Disney Cruise Line will once again offer Star Wars Day at Sea in early 2022? Yep, the force will be with you during select seven-night Caribbean cruises aboard the Disney Fantasy. Here are some of my favorite things about this intergalactic experience:

Last up, I want to share with you two of my four-year-old daughter’s favorite places to visit when we’re on a Disney cruise, which means so much to me because I had a hand in designing these spaces. Aboard two of our ships, kids can have their own Star Wars experience inside Disney’s Oceaneer Club.

On the Disney Dream, kids can design a starship, train like a Jedi or climb into Han Solo’s cockpit in Star Wars: Millennium Falcon. And on the Disney Fantasy, they can train with Jedi or X-Wing pilots, connect to legendary spacecrafts via an interactive “holotable” and combat First Order Stormtroopers face-to-face at Star Wars: Command Post.

The best part? We’re not done creating Star Wars experiences for Disney Cruise Line guests… but I can’t tell you anything else yet! If you want to know more, keep following along on the Disney Parks Blog to be among the first to hear about what other out-of-this-world adventures we have up our sleeves.

Likes (6)
Share How to Travel to a Galaxy Far, Far Away Aboard a Disney Ship