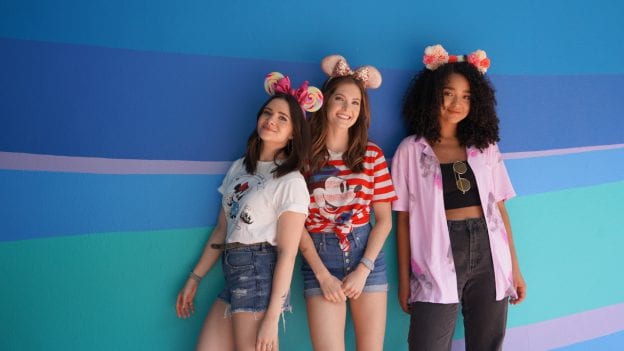 Last time we hung out with “The Bold Type” stars, Katie Stevens, Aisha Dee, and Meghann Fahy, was back in 2019 when they visited Walt Disney World Resort to celebrate their third season. So, it’s hard to believe that this critically acclaimed, fan-favorite show has just started its fifth and final season.

Before fans bid farewell to the characters Jane, Kat, and Sutton; I was able to chat with Katie Stevens (Jane) about the show and reflect back on some of her favorite Disney park memories.

Q: The Bold Type is launching its fifth and final season! What can we expect from the final season and where did we last leave off with your character?

A: This final season is emotional. There is so much to wrap up with these character’s stories. When we last saw Jane, she was newly promoted as a boss and grappling with two difficult situations:  a complicated magazine story and a workplace romance. I’m really happy with where all of our characters end up, and I hope fans will be happy!

Q: I know you and your two castmates visited Walt Disney World Resort a few years ago, but what I want to know is, what would your character’s favorite attraction at a Disney Park be and why?

A: Well, as any of the girls will tell you I am a Disney fanatic. Katie and Jane are probably very different in their Disney attraction favorites. My personal favorite is The Twilight Zone Tower of Terror at Disney’s Hollywood Studios, or any ride that spikes my adrenaline and makes me scream. Jane would be a little more on the safe side.  Jane would probably love any ride in Fantasyland like “it’s a small world.”

Q: What about your favorite character? Is it the same or different than your personal favorite?

A: For me, it’s hard to choose a favorite character. I personally love classic Disney characters like Pocahontas and Ariel, but I also love all of the more recent princesses too. I feel like Jane would love Moana, because she’s strong and fearless and goes after her dreams.

A: Walt Disney World is magical for so many reasons, mostly because it brings out everyone’s inner child. Disney taught me to believe in my dreams, to believe in magic, and the Parks always feel like home to me.  They’ve been a place of comfort for me, a place to connect with my family and friends, and to hold on to that childlike feeling I had the first time I went when I was 3 years old. Walt Disney World will always be a happy place for me filled with so much love and happy memories!

Tune in every Wednesday night on Freeform to see Katie and the rest of the girls in their final season of ‘The Bold Type.’ Watch new episodes next day on Hulu.