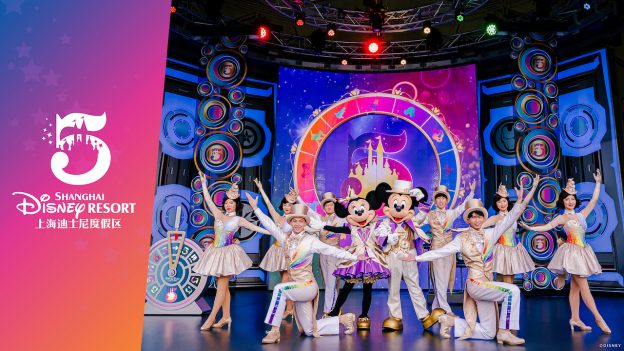 Guests at Shanghai Disney Resort will notice Mickey and friends sporting a celebratory new look that honors their 5th anniversary. Inspired by the Enchanted Storybook Castle and the concept of “Endless Surprises,” the cast and character costumes add extra flair to the Year of Magical Surprises.

Take a peek behind the scenes with the Shanghai Disney Resort Costuming team – Kenneth Leung, Costuming Director, Chin Yeh, Senior Costumer, Joy Yan, Costumer, and Nick Xu, Area Manager of Workroom – as they detail what it takes to bring these special designs to life.

Before you learn more about these remarkable designs and the people who created them, be sure to check out the costumes in action as cast members and some of your favorite Disney pals strut their stuff on the runway:

Tell us a little bit about yourself and this team behind these beautiful costumes.

Chin: I used to be the Costume Operation Manager when Shanghai Disney Resort first opened, then I moved to my current Costume Creative role to work on character designs the year after the park opened.

Joy: Since the opening of the park, I have been working on the Character team. It has now been five years since I first started designing our Disney friends’ costumes.

Nick: I joined the Shanghai Disney Resort Costume Department in 2017 and I currently lead the Costume Studio team.

Can you tell us more about what went into designing these 5th Anniversary costumes?

Kenneth: It has been a great journey that started 20 months ago, in summer 2019. We spent almost five months on concept development, costume designs, fabrication selection and development, and another four months on a large amount of patterning, muslin mock-up and prototype building, with fittings, modification and reviews before moving on to production.

The key concept was inspired by our fascinating Enchanted Storybook Castle and the concept of “Endless Surprises.” The 5th Anniversary Celebration is unique, charming and memorable, and the most delightful hosts of this celebration, Mickey Mouse and Minnie Mouse, have prepared lots of Magical Surprises inside every room in the castle for our guests. Guests will also find that the colors of Mickey and his pals’ costumes were designed in pairs, while at the same time, we use the overall colors of ivory and champagne to unify all of their costumes.

Nick: The studio is responsible for clothing production. Every time we receive a new project, we need to research the characteristics of the fabric, and decide on the matching accessories and crafting requirements accordingly. It usually takes several rounds of experiments and adjustments before we make a final decision. The production of the 5th Anniversary costumes, from constructing models and completing the samples, to the final production, took 11 months and 9,980 working hours. A total of 23 teams were involved in this project.

Which characters have new costumes for the 5th Birthday?

What is the significance of the ivory and champagne color palette?

Chin: The Enchanted Storybook Castle is a landmark of Shanghai Disneyland. Inspired by the castle, we wanted to embed classic and royal elements into the character costumes. The cream and ivory color is a good choice to express such a tone, while the champagne color is extremely elegant and often used in gift ribbons. We wanted to present the costumes as a gift to our guests.

What was the inspiration behind these costumes?

Chin: You will see the ivory color palette along with various colors on the character costumes, including purple, red, blue, green and others. Each color has been highlighted separately on different characters, and as a whole create “harmony” with all of the characters together. This notion is inspired by the oriental philosophy of harmony with the five elements. The five elements are represented by different colors, highlighting a harmonious relationship with the natural world.

Joy: The whole design concept is inspired by harmony, while the style is inspired by Art Deco. You can see a lot of lines and the use of gradient colors in the design. We wanted to help create a celebratory atmosphere so that guests who see the costumes will be immersed in the festivities.

How do these costumes evoke the anniversary theme of “Magical Surprises?”

Kenneth: There are lots of festival elements that can be found in our designs: flying ribbons, hidden “5” logos on brooches and buttons, the gradual color palette on dresses representing different levels of unpredictable Magical Surprises.

Chin: The most beautiful gifts are always the most surprising. We use the champagne gold to create decorative ribbons to “package” everyone together as exquisite gifts to deliver a classy image and atmosphere of celebration to our guests.

It was remarkable to see these beautiful costumes in action! What was it like participating in a fashion show with these costumes?

Chin: It was such a pleasure and honor to participate in the fashion show as a Disney costume designer, and represent the Shanghai Disney Resort Costuming team to present this collection. The whole process was very fun. I was so happy to see all of the characters shining with their brand new looks, and the excitement and joy from the audience.

Joy: I was so excited and proud of it. We represented the behind-the-scenes team and we hope they can be noticed by our guests.

Nick: This is the first time I worked onstage. It was a very rare opportunity and experience for me. I was very happy and my daughter, family and my friends were also happy and proud of me. Disney is a place where we create magic, and this magic will definitely bring continuous power to my future work.