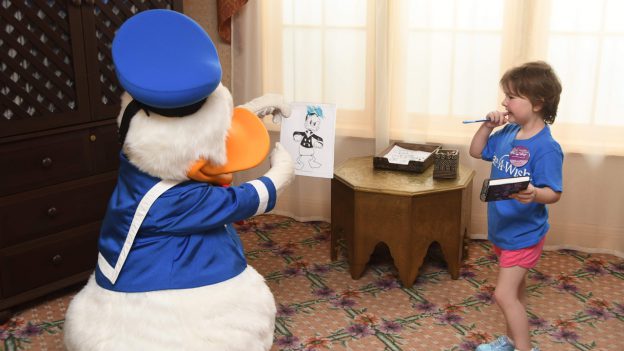 Today is Donald Duck’s Birthday, and we’re celebrating our favorite duck and the impact his hilarious hijinks have had on countless children around the world. Known for his fiery temper, Donald made his animated debut in the Silly Symphony, “The Wise Little Hen,” on June 9, 1934. Since then, he has been quacking up guests at Disney Theme Parks since 1955. For four-year-old Sasha, all she’s ever dreamed of was meeting her favorite Disney pal, Donald Duck.

Diagnosed with leukemia, the bubbly, outgoing girl faced the battle of a lifetime – going from giggling with her friends, to spending days at a time in the hospital undergoing medical treatment. Through it all, she always found a way to smile – with the help from her favorite cartoons starring the hilarious Donald Duck.

When Sasha learned she would be granted a wish from Make-A-Wish, she wished for a big hug from her favorite bird at the Walt Disney World Resort. Little did she know that she was about to have the experience of a lifetime.

At the end of her treatment, she was finally able to turn her dreams of meeting Donald Duck into a reality. On the big day, Sasha arrived at Magic Kingdom Park, and Donald was waiting with wings outstretched for the great big hug she had wished for. But Sasha’s visit with Donald Duck didn’t stop there – they took photos and even colored pictures of Disney princesses together. “I was really, really, really excited!” Sasha said. “It was magical. He even drew me a picture. It felt like he was my best friend!”

Sasha continued her day skipping through the parks and filling up her autograph book with memories from each of her favorite characters. She got to ride Mickey and Minnie’s Runaway Railway attraction and shared the experience of a lifetime with her family.

For 40 years, Disney and Make-A-Wish have worked together to make more than 145,000 wishes come true. To learn more, visit wish.org/Disney.