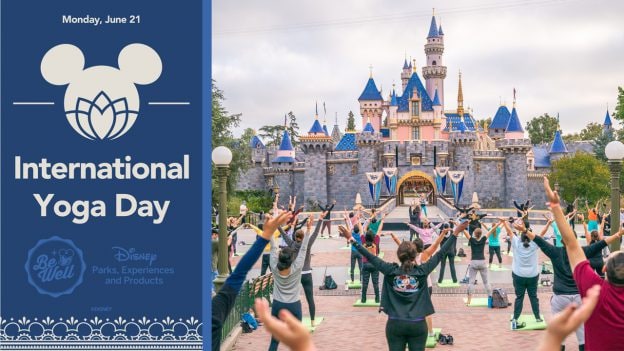 June 21 marks International Yoga Day and to celebrate, our Disney Parks, Experiences and Products cast members participated in special cast-exclusive yoga events at our parks around the world. These events continue our commitment to deliver unique experiences for cast and to encourage healthy living and self-care, while supporting cast member balance and wellness.

From watching the sunrise over Sleeping Beauty Castle at Disneyland park, to a virtual session that was out of this world, take a peek at the celebrations held around the globe.

Aulani, a Disney Resort and Spa

Cast members at Aulani, A Disney Resort and Spa took to the Hālāwai Lawn for a mid-morning session.

Amidst the hustle and bustle of its recent reopening, Disneyland Paris cast members still found time to squeeze in a yoga session at several locations around Disneyland Paris before it reopened to guests on June 17. Disneyland Paris Ambassador Giona Prevete joined in the fun with a session in front of Ratatouille: L’Aventure Totalement Toquée de Rémy.

On the heels of Shanghai Disney Resort’s 5th anniversary, cast enjoyed a magical morning flow in front of Enchanted Storybook Castle. Chip ‘n’ Dale made a surprise appearance and led cast in a warm-up.

Cast members and employees from across The Walt Disney Company participated in a virtual yoga event, streamed from in front of the Millennium Falcon at Star Wars: Galaxy’s Edge at Disney’s Hollywood Studios.