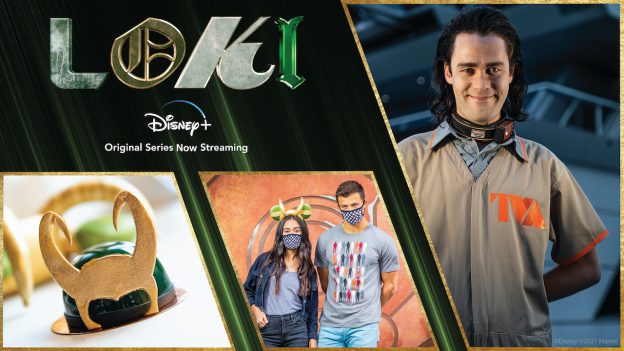 Celebrate the God of Mischief with New Merchandise, Food and Beverage and a New Look for ‘Loki’ at Avengers Campus

The premiere episode of the new Disney+ Original Series “Loki” is now streaming, and I am MORE than just low-key (sorry, I had to do it) excited for it. “Loki” features the God of Mischief as he steps out of his brother’s shadow in this live-action series created exclusively for Disney+ and takes place after the events of “Avengers: Endgame.”

To celebrate the God of Mischief getting his own series, we have some exciting new ways for you to expect the unexpected:

If you’re visiting Disney California Adventure park this week, you’ll definitely want to check out Avengers Campus, where heroic encounters await you, and now is the perfect “time” for an encounter with Loki himself! Over the next month, we may even see different sides of Loki as you’ve never seen him before, sometimes accompanied by the Minutemen of the Time Variance Authority (TVA).

And there are some new interstellar relics that the Collector has added to his unique collection near Guardians of the Galaxy – Mission: BREAKOUT!

As we mentioned during our opening ceremony last week, as the universe of Super Heroes continues to grow, Avengers Campus will always be changing, so keep your eyes peeled for even more new characters and looks for some of your favorites out and about.

New Loki fit check at ##CaliforniaAdventure! IFYKYK, if you don’t you should stream Loki on ##DisneyPlus 💚 @disney ##Disney ##Disneyland ##Loki

Gear Up With the Timeliest Products

You don’t have to jump through time to pick up an awesome Time Variance Authority T-Shirt or a Loki Silhouettes T-Shirt- both available at the Disneyland Resort Backlot Premiere Shop at Disney California Adventure park and Super Hero Headquarters at Disney Springs.

For those at home, catch up with the other variants with a ”For All Time. Always!” t-shirt or a Time Variance Authority pullover sweatshirt on shopDisney.com

When you’re wearing a limited release Loki pin and the new Loki ear headband, everyone will know you’ve got a little bit of good and a little bit of bad in you – both available at Disneyland Resort Backlot Premiere Shop featuring Avengers Campus at Disney California Adventure park and Super Hero Headquarters at Disney Springs.

You can even find some Loki swag on Amazon; clear your mind (stone) and quench your thirst with a Miss Minutes Thermos Tumbler. Pick up the new Loki Funko Pop! and Mobius Funko Pop! to add to your sacred collection for all time. Always.

Located near Disney Springs? You’re in luck! Indulge in a Loki Mini Dome Cake at Amorette’s Patisserie. This sweet treat has a Dulce Mousse, Apple gelee, salted caramel crisp pearls and lemon chiffon! Then head on over to The Ganachery for the Fractured Timeline Ganache Pop, an Apple ganache pop decorated with clashing green colors, gold dust, and a fractured timeline on top!

It’s worth mentioning that as Loki’s story unfolds in the coming weeks, new products featuring new characters may pop up, so stay alert! You don’t want to miss anything, so be sure to watch the premiere episode of “Loki”, now streaming on Disney+, with new episodes being released each Wednesday! It’s sure to be a great “time.”

Likes (16)
Share Celebrate the God of Mischief with New Merchandise, Food and Beverage and a New Look for ‘Loki’ at Avengers Campus