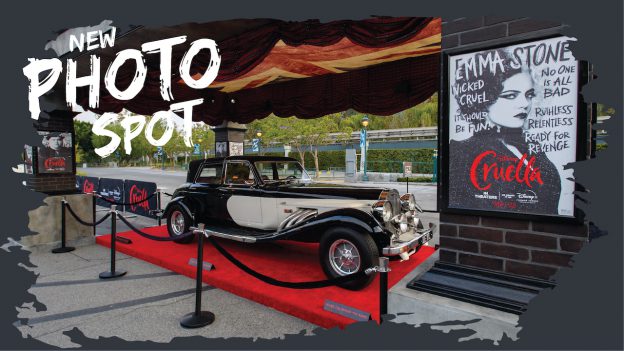 In Disney’s “Cruella,” Estella’s former schoolmate, Anita (played by Kirby Howell-Baptiste), becomes a photojournalist at the tabloid publication, Tattletale. With camera in hand, she’s always looking for the latest inside scoop on the world of fashion. Now you can snap a picture of your own signature look at special limited time photo opportunities and Disney PhotoPass offerings celebrating the new film at Disney Parks.

The iconic Cruella-Mobile from the film has arrived at Downtown Disney District at Disneyland Resort, where for a limited time, guests can pose alongside Cruella’s stylish ride in a display near the Esplanade.

Fun behind-the-scenes fact: while filming, the crew had just 36-hours to turn the bronze car used in the getaway scene for stunts into Cruella’s black-and-white “hero” car with no detail overlooked down to the elegant polished, handmade license plates. Don’t miss this opportunity to snap a photo with the Queen of Mean’s notorious getaway car before it drives off.