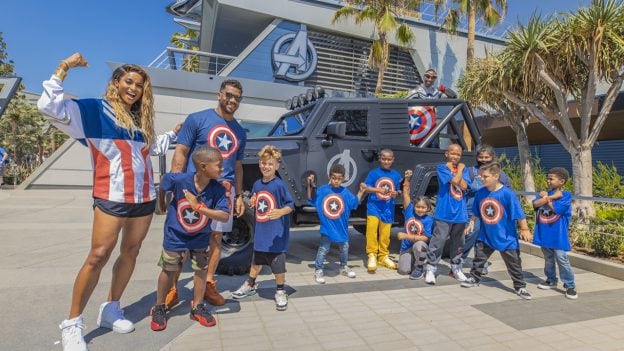 Today, Seattle Seahawks quarterback Russell Wilson was revealed and celebrated as one of “Earth’s Mightiest Athletes,” a new collective of sports superstars that embody the positive characteristics of Earth’s Mightiest Heroes—The Avengers!

“Earth’s Mightiest Athletes” honors sports champions making positive change, recognizing their outstanding achievements on the playing field and their super-powered community service efforts. First in joining the inaugural all-hero athlete team, Wilson is recognized for exhibiting the qualities of Captain America, including agility, strength and courage for those most in need.

So, it’s fitting that on Father’s Day, as a way of commemorating this new honor, Russell treated a group of Los Angeles-based kids from his and wife Ciara’s Why Not You Foundation and affiliated national youth mentoring organization, Friends of The Children, with a magical day of play at the Disneyland Resort.

At Disney California Adventure park, the heroic group assembled at the all-new Avengers Campus, encountering Captain America himself and slinging webs on WEB Slingers: A Spider-Man Adventure. The kids were also treated to a special visit to the LEGO Store in the Downtown Disney District, where they got to shop for their very own Captain America-inspired LEGO sets and collectibles, among others.

Check out their super awesome day in the video below!

Wilson and the full consortium of “Earth’s Mightiest Athletes,” will be honored at the Sports Humanitarian Awards on July 12 in New York, with a television special airing on July 24 at 2 p.m. ET on ABC.