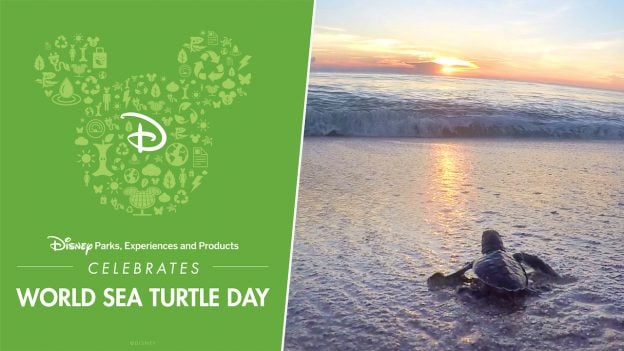 It’s that sea turtle time of year here in the Sunshine State- and what a perfect place to celebrate World Sea Turtle Day! Sea turtles swim vast distances across the world’s oceans and play a vital role in the balance of marine habitats. Florida is lucky to be home to five of the seven species of sea turtles found worldwide, with three of those species using our beaches to lay several clutches of eggs from March through October each year. During the summer months while mother sea turtles crawl onto our beaches nightly and lay around 120 eggs in the sand during each visit, Disney Conservation Team Wildlife surveys the beaches at Disney’s Vero Beach Resort, recording new nesting activity and monitoring nests until they hatch. As I write, there have been 375 nests laid on our beach so far this season!

We are also celebrating the release of four special turtles that were recently rehabilitated by Disney animal care professionals at the Seas with Nemo and Friends at Epcot (The Seas). These juvenile green turtles washed ashore back in March, malnourished and in need of some extra TLC.

The young turtles were initially cared for by the Brevard Zoo’s Sea Turtle Healing Center, and then later transferred to the Seas to make more room there as more turtles were found stranded on nearby beaches in need of rehabilitation space. Just a few short weeks ago after showing they were healthy enough to return home, Toffee, Samoa, Pluto, and Copernicus were released back into the ocean at Disney’s Vero Beach Resort.

Team Wildlife is thrilled that we could help these turtles make a full recovery. A recent story from our colleagues at the Sea Turtle Conservancy shows just how important rehabilitation efforts like this truly are- they recently saw an adult green turtle nesting in Costa Rica that had been rescued and rehabilitated after suffering from a sudden drop in temperatures (a cold-stunning event) in Florida waters ten years prior!

Disney Conservation Fund grant recipients also continue to lead impactful sea turtle conservation work around the globe, and this past year we were thrilled to fund the Sea Turtle Conservancy’s long-term sea turtle monitoring program in Tortuguero, Costa Rica, where they protect the largest green turtle population in the Atlantic and train aspiring conservationists through a research assistantship program.

It takes partnership between many organizations to save highly migratory ocean mariners like sea turtles, who nest in certain countries and forage for food in others. I continue to be inspired by these stories of incredible people cooperating to protect sea turtles from Florida’s shores to the oceans around the world, and together building a bright future for these animals. Happy World Sea Turtle Day!