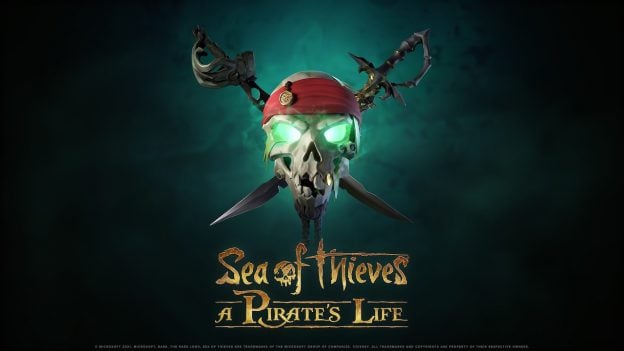 Is it a pirate’s life for you? Gamers and aspiring pirates are probably already familiar with “Sea of Thieves,” the shared world action-adventure video game from Rare that lets you embark on your own pirate experience, full of thrilling quests as you navigate the high seas.

Well, two pirate worlds are now about to collide. Disney collaborated with Rare and Xbox to bring you Sea of Thieves: A Pirate’s Life, an exciting original story to save the pirate’s way of life alongside none other than Disney’s “Pirates of the Caribbean” legend Captain Jack Sparrow… and it comes out TODAY!

In this new story campaign, an unforgettable adventure takes place over five Tall Tales. After rescuing Captain Jack Sparrow from an unfortunate predicament, you’ll set sail alongside him to uncover secrets, encounter characters old and new, and clash with surprising enemies as you explore the Sea of Thieves – and visit some new locations that’ll be familiar to fans of Disney’s “Pirates of the Caribbean” film franchise and the beloved theme park attraction!

If you think that riding the Pirates of the Caribbean attraction immerses you into Jack Sparrow’s treacherous world plagued by scoundrels, this game will take that immersion to a whole new level. It showcases several iconic scenes from the original 1967 Pirates of the Caribbean attraction in Disneyland park, like the Treasure Room, the Ship Battle, and— my personal favorite— the Jail Scene featuring the dog holding the keys to freedom. Pirates fans can adventure and explore through these well-known scenes brought to life in the game in beautiful detail and truly authentic to the classic attraction. The exciting new gameplay experience casts YOU, the players, as the main characters within this adventurous world!

If ye be seekin’ adventure, ay – you’ve got to get your hands on this game! Sea of Thieves: A Pirate’s Life launches today as part of the Season Three update, available for free to all Sea of Thieves players who have bought the game on Xbox Series X|S, Xbox One, Windows 10 PC or via Steam, or players who have access to it with Xbox Game Pass.

Xbox Game Pass Ultimate members can enjoy series, movies, including Disney’s “Pirates of the Caribbean: The Curse of the Black Pearl” with a new 30-day trial to Disney+ via Perks*. If you claimed the initial Disney+ Perk or not with Game Pass, Ultimate members who do not currently have an active Disney+ subscription will be eligible to claim the 30-day subscription trial through the Perks Gallery on their Xbox console, on the Xbox app for Windows PC, or through the Xbox Game Pass mobile app on iOS and Android. Once the Perk is claimed, members will be directed to the Disney+ site to activate their subscription. Members can claim and activate the trial now until September 30.