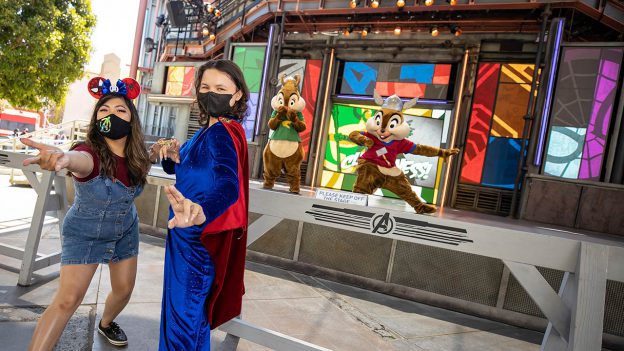 Avengers Campus at Disney California Adventure park is now open, bringing together Earth’s Mightiest Heroes. However, did you know that just around the corner you can find a few “off campus” heroic offerings? That’s right! In the heart of Hollywood Land, you’ll find Mickey and his pals donning their Super Hero finest, some rad backdrops to help you perfect your best Super Hero pose, plus a mission-critical shopping destination.

At the Hollywood Backlot Stage, Mickey Mouse and Minnie Mouse can be spotted dressed as their favorite Super Heroes. Mickey bounds as Captain America, representing the heroic trait of honor and Minnie bounds as Spider-Gwen, reflecting responsibility. Chip playfully bounds as Thor, showcasing worthiness, while Dale bounds as his brother Loki, demonstrating cleverness. Swing by for a selfie!

Nearby, Agatha is at it again as the fan-favorite Disney+ “WandaVision” photo opportunity has returned to a new location taking you back in time and placing you inside a retro living room set.

You can also take flight with “The Falcon and the Winter Soldier” backdrop featuring Sam Wilson’s Captain America shield and wings as the centerpiece.

And in the spirit of flight, you can also take your pics to the next level, a.k.a. “Higher, Further, Faster” with Captain Marvel’s jet fighter at Hangar 12. Still one of my favorite backdrops of all time! Also, don’t miss snapping a selfie in front of the walls surrounding the Coca-Cola Lounge, which are themed to the upcoming “Black Widow” film. The walls showcase new heroes and villains from the upcoming film that will release simultaneously in theaters and on Disney+ with Premier Access on July 9.

As we’ve shared before, remember to gear up for your missions at the Disneyland Resort Backlot Premiere Shop featuring Avengers Campus. This location is a one-stop shop for all of your Super Hero gear, including the all-new WEB Tech, Spider-Bots, apparel and more.

Stay tuned for more on ‘off campus’ fun! Starting June 18, get ready for an all-new photo location inspired by Black Panther and Wakanda, next to the Studio Store. Later this month, you’ll be able to step into a corner of the Time Variance Authority (TVA) inspired by “Loki,” which is now streaming on Disney+. Discover a “timely” green and gold backdrop near the Disneyland Resort Backlot Premiere Shop where you can pose alongside a life-size statue of adorably cheerful TVA mascot, Miss Minutes.

Which Super Hero experiences are you most looking forward to in Hollywood Land?