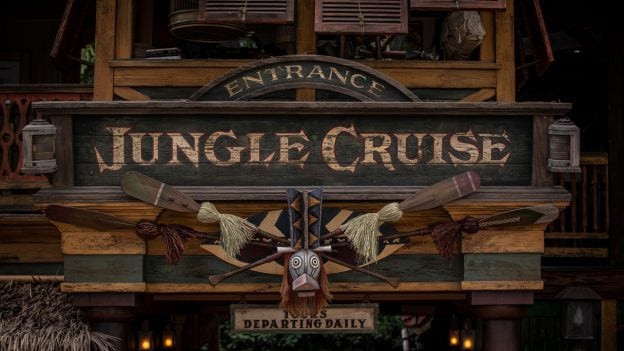 The newly-enhanced Jungle Cruise attraction officially opens to explorers today, July 16, and the mischievous wildlife are ready at Disneyland park! Disney Imagineers have taken a deeper dive into the backstory of the comedic characters, safari adventurers and tour guides you will meet on their journey through the jungle.

For the first time in Disney history, a cast member is featured in a Disney park attraction – a Jungle Cruise skipper! Travelers will find a rhinoceros pointing the way to Ill-fated skipper Felix as his passengers pass him by, up a pole!

The video below highlights a few familiar favorites along with the new fun you can find on this sometimes perilous, always hilarious river adventure. Also appearing, is one of our witty skippers – some say they are the true stars of the show!

You can take this Jungle Cruise journey today at Magic Kingdom Park, where all the new adventures will soon be complete. Wherever you choose to start your adventure, the most dangerous part of the journey is always the same – coming back to civilization!

After your adventures at Disneyland park, stop by The Tropical Hideaway for the new DOLE Whip® Pineapple Split, featuring DOLE Whip®, blueberries, strawberries and Mandarin oranges, topped with coconut-caramel sauce, crushed plantains, dried hibiscus and toasted coconut. Starting July 16 and while supplies last, it will be served in Jungle Cruise Dessert Bowl, which looks like a Jungle Cruise boat complete with a red-and-white striped canopy!