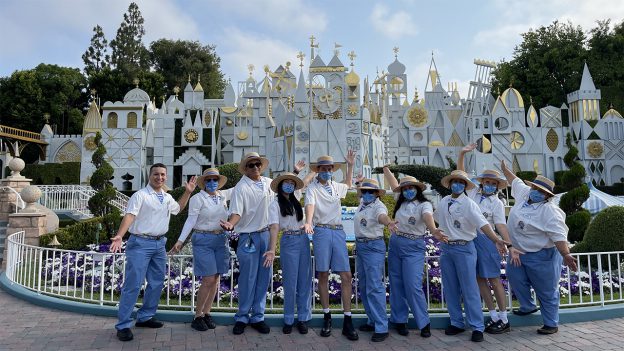 In recognition of everything they do, Disneyland Resort cast members are celebrated in a week of festivities during Disneyland’s anniversary each year. After all, there would be no magic without cast members! Cast members enjoyed free food, attraction experiences, after-hours celebrations in the parks, photo opportunities, giveaways and Duck Races…

Yes, Duck Races! No, not real ducks… rubber duckies! As one of the most beloved cast-exclusive events, cast members were ecstatic about the return of Duck Races this year. Cast members purchased and decorated $5 rubber ducks (all proceeds benefit Goodwill of Orange County) and raced them through “it’s a small world” before the park opened to guests.

After the ducks set off on the happiest cruise that ever sailed, cast members eagerly waited outside the attraction to see which duck would return first from their trip around the world. Shouts of excitement were heard as the duck that took the lead sailed out of the attraction, decorated by Ruth from Star Wars: Galaxy’s Edge.

“I’m not a morning person, so I actually feel amazing today coming out as first place, said Ruth, Merchandise Host. When asked about her duck, she said: “I really like the character Ahsoka from Star Wars: The Clone Wars. Her character is very inspirational, and I think everybody can be an Ahsoka.”

Proceeds from the rubber duck sales benefit Goodwill of Orange County to help people that are facing challenges and barriers find meaningful jobs. “We are proud to be a long-time partner of Disneyland Resort and so grateful to be the nonprofit recipient,” said Nicole Suydam, President and CEO, Goodwill of Orange County. “This mission work is more important than ever with the current unemployment rate for people with disabilities at 12.6% and we are committed to providing support, trainings and opportunities for everyone who wants to work.