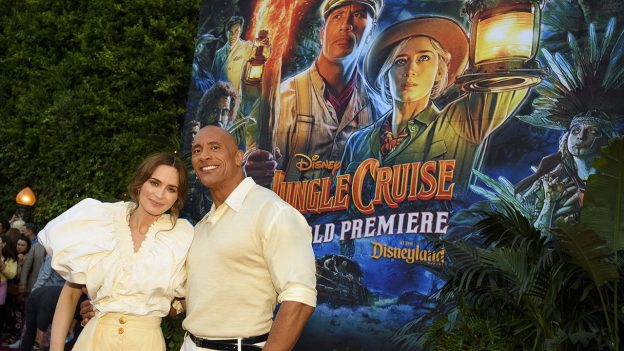 Unless you’ve been living under a rock or on the backside of water, you probably already know that the World Premiere of Disney’s “Jungle Cruise” took place this past weekend at Disneyland park! And wow, was it wild?!

The journey from the rivers of the original Jungle Cruise attraction that inspired the film, to the red carpet, the premiere screen and back is something only Disney can deliver.

Catch the highlights in the video above! For the full replay of the red carpet live stream, check out our story here.

Dwayne Johnson and Emily Blunt looked stunning as they arrived on the red carpet – via Jungle Cruise boat, of course!

They were joined by quite the cast!

Speaking of cast … Jungle Skippers from the attraction played a key role in navigating and welcoming Dwayne and Emily in true Disneyland fashion! “Tonight was just honestly a surreal experience. I appreciate being able to be here with my fellow skippers,” shared Flor, who has been a Jungle Cruise skipper since 2012. Jungle Cruise skipper Joey shared puns with fans as he made his way down the red carpet. “The entire night we got to be the VIPs and even better, we got to see the amazing movie!”

See the skippers’ take over the red carpet on the @DisneyParksBlog Instagram!

… And for one of the most incredible outfits of the night, Nina West was enveloped in the Jungle Cruise storyline, taking us on a journey to the amazing, the magnificent, backside of water!

When Disney’s “Jungle Cruise” officially premieres on July 30, you’ll be able to join fan favorites Dwayne Johnson and Emily Blunt for the adventure of a lifetime on a rollicking thrill-ride down the Amazon with wisecracking skipper Frank Wolff and intrepid researcher Dr. Lily Houghton. Lily travels from London, England to the Amazon jungle and enlists Frank’s questionable services to guide her downriver on La Quila—his ramshackle-but-charming boat. Lily is determined to uncover an ancient tree with unparalleled healing abilities—possessing the power to change the future of medicine. Thrust on this epic quest together, the unlikely duo encounters innumerable dangers and supernatural forces, all lurking in the deceptive beauty of the lush rainforest. But as the secrets of the lost tree unfold, the stakes reach even higher for Lily and Frank and their fate—and mankind’s—hangs in the balance.