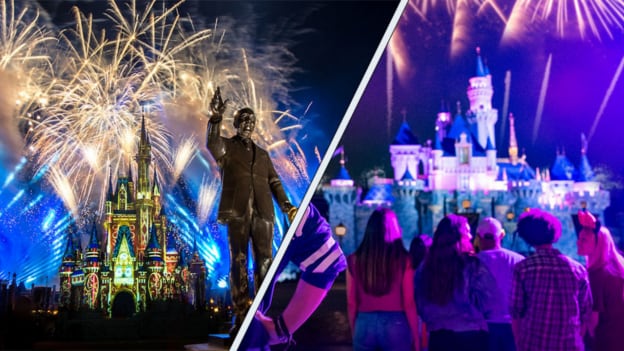 From Coast-to-Coast, Disney Cast Members are the First to See Fireworks Spectaculars Return

Magic Kingdom hosted “Homecoming Ever After” for cast. Whether they were working to make the magic safe and possible, or attending, everyone was thrilled and moved. On top of all the fun, Jordan Fisher came to surprise our Magic Kingdom cast. See their reaction on Disney Parks TikTok.

I’ve only ever worked on Main Street, U.S.A. I’ve been here from Wishes & Disney’s Electrical Parade to the opening of Happily Ever After. And clocking in tonight, I had goosebumps—it’s like opening fireworks and working the spectacular for the first time all over again.

Across the country, cast members at Disneyland Resort were equally thrilled to have a cast preview of the fireworks and witness the spectacular once again.

Senior Technical Director, Joseph, who’s worked at the resort for 38 years, manages the lighting and effects for “Mickey’s Mix Magic” and is thrilled to bring back this fan-favorite. Joseph’s team works in partnership with the pyrotechnic team to make the magic happen and the team’s thought through everything, from over 100 moving lights across 10 rooftops to even providing unique vantage points for guests who visit the parks regularly. Hear more of Joseph’s team and “Mickey’s Mix Magic” on the Disneyland Ambassador Instagram.

I’ve been working here for 10 years and I’ve seen the fireworks almost every night. That’s almost 2,000 firework shows and this one feels like the first one all over again.

The return of fireworks could not have come at a better time as we continue to celebrate the tradition of the “kiss goodnight” at the close of a magical day at Walt Disney Parks. As a reminder, valid park admission and a park reservation are required for park entry and must be linked to your account. Visit Disneyworld.com/update and Disneyland.com/update for important information, including park attendance requirements.

To stay up-to-date on #DisneyCastLife stories, be sure to follow Disney Parks and Ambassador social channels.