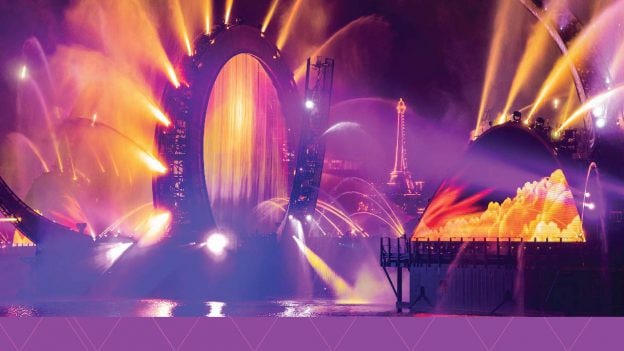 We’re just a little more than two months from the next major milestone in the transformation of EPCOT, the debut of “Harmonious,” the new nighttime spectacular that is one of the largest ever created for a Disney park and unlike anything that’s been seen before.

“Harmonious” illuminates our shared humanity, bringing to life the vision of EPCOT through a celebration of our world and its promise. Over the years, cultures from around the world have provided inspiration for Disney films and music. In “Harmonious,” a global community of musical artists has come together and reinterpreted those familiar stories and songs in their own voice, honoring their respective cultures. Collectively, they contribute to a unique experience that could only happen at EPCOT, a place where the impossible becomes possible through the power of human imagination and the magic of Disney.

The show moves through three distinct chapters, inviting us to gather on the shores of World Showcase Lagoon, celebrate the countries and cultures of the world, and ultimately unite to create a bright tomorrow. “Harmonious” begins with a sunrise, and as the world awakens around us, we set out on a journey that takes us across the globe. It’s a dazzling and diverse feast for the eyes and ears, from the South Pacific home of “Moana” and a Middle-Eastern interpretation of “Aladdin” to “The Jungle Book” in India, China’s legend of “Mulan,” the European nations that inspired “Brave” and “The Hunchback of Notre Dame,” and so much more.

Here’s a first look at how this stunning spectacle is coming together, as teams from Disney Live Entertainment and Walt Disney Imagineering continue working to get “Harmonious” ready for opening night.

“Harmonious” will make its grand debut on October 1 as part of the launch of “The World’s Most Magical Celebration,” marking the 50th anniversary of Walt Disney World Resort. Be sure to check Disney Parks Blog regularly for updates on “Harmonious” and the celebration as the big day draws nearer!