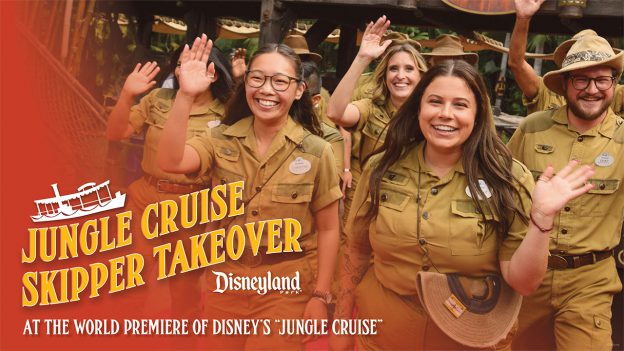 While Jungle Cruise skippers have navigated the treacherous waters of the Amazon River and sailed for miles down the Nile, they’ve never encountered a live “stream” before, that was until the World Premiere of Disney’s “Jungle Cruise” at Disneyland park. Skippers made their way down the red carpet alongside Dwayne Johnson and Emily Blunt in an adventure unlike any they had embarked on before and one that could only happen at Disneyland! “Tonight, was just honestly a surreal experience. I appreciate being able to be here with my fellow skippers,” shared Flor, who has been a Jungle Cruise skipper since 2012. Skipper Kipp felt the same way, “I didn’t have any idea of what to expect when we were invited to come, and we were honored as skippers and then we got to see the movie.” As for the film, 10 out of 10 skippers approved, perhaps Kipp said it best, “they respected our attraction in references in the movie and kept our humor alive.”

See the skippers’ takeover the red carpet on the @DisneyParksBlog Instagram Story and see Disney’s “Jungle Cruise” in theaters or order it on Disney+ with Premier Access on July 30, 2021. Disney+ subscription and additional fee required.