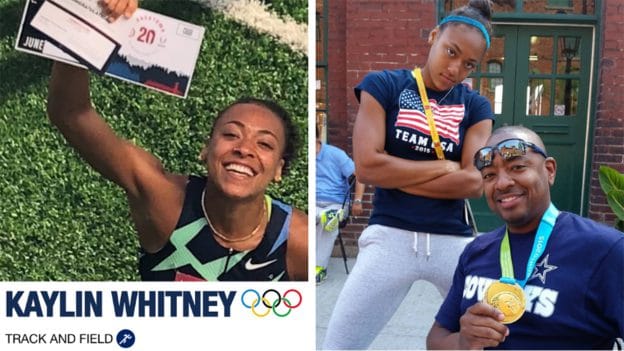 “Stay healthy, humble and hungry.” That’s what Disney Vacation Club cast member DuWayne Whitney told his then seven-year-old daughter, Kaylin, when she told him she wanted to be an Olympian.

Kaylin worked toward this dream since she was a kindergartener, running races in her school’s field day events. By the age of 10, she was breaking Amateur Athletic Union records in track and field.

Kaylin’s mom, Kerrie Dworetsky, also works for Disney, as a server in EPCOT at The Garden Grill Restaurant.

Kerrie shared, “Kaylin grew up being a true Disney kid. When she talks to the other athletes in Tokyo, she tells them her parents work for Disney. They are always so amazed!”

To add to her journey, the pandemic caused the 2020 Olympics to be postponed until this year. DuWayne said the pandemic was a blessing in disguise for Kaylin. “The extra year gave Kaylin time to learn more about herself and really focus on who she was. She became a vegan and actually switched events moving up to the 400-meters and finished 5th at the U.S.A. Olympic Trials becoming an alternate in the Relay pool,” he explained.

In a recent interview Kaylin said, “This is what never giving up looks like.” Kaylin pushed through the adversity of becoming a professional athlete early on, to running meets internationally and truly reinventing who she was as an athlete.

While spectators are not allowed to travel to the 2021 games, Kaylin’s family will be watching and cheering her and Team U.S.A. on from Orlando, FL. Kerrie’s Garden Grill family even put together a package of letters and pictures for Kaylin to put on her walls in her room to remind her that she’s not alone.

“After the year we’ve had, being able to watch Team U.S.A. be the shining light for our country—and Kaylin to be a part of it—is phenomenal. I can cry just thinking about her being an Olympian,” DuWayne said. “This is truly the most surreal feeling ever.”

Watch Kaylin Whitney compete at the Olympic Games in Tokyo by following the schedule below:

The races are played live in the morning and replayed each night.

Send Kaylin and Team U.S.A. your good luck wishes in the comments below!