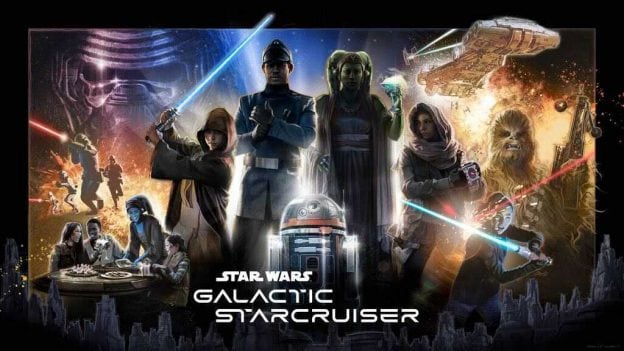 Are you ready for an all-immersive adventure in a galaxy far, far away aboard Star Wars: Galactic Starcruiser? Well then take a glimpse at what you can expect during your two-night journey in this new promotional poster we’re sharing today for the first time.

Opening in 2022 at Walt Disney World Resort, Star Wars: Galactic Starcruiser will invite you into a new kind of “storyliving” as you travel the galaxy in a finely appointed starship. So far, many details about this new experience have been as cryptic as a Bothan spy, so it’s exciting to get another peek at what we have in store. Let’s take a closer look, shall we?

So my guess is this poster leaves you with as many questions as answers. Well, I have good news: We’ll soon be sitting down with Disney Imagineers to discuss all things Star Wars: Galactic Starcruiser, and will share that conversation with you here on the Disney Parks Blog and other Disney social channels. It will be the most in-depth discussion of this incredible new experience Walt Disney Imagineering has ever given publicly, so make sure you keep following us to find out more.

You can also visit starwarsgalacticstarcruiser.com and sign up to receive updates as they’re released.

Until next time … may the Force be with you.