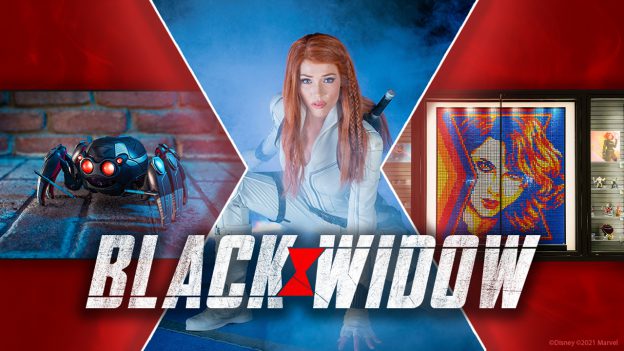 Who else has been counting down the days, hours, and minutes until “Black Widow” is released in just a week? I sure have been, and I’ve embraced my inner super spy to gather the latest intel on the top ways to celebrate at select Disney Parks around the world:

Whether you’re visiting Avengers Campus for the first time or multiple times, you never know who might spring into action! Keep your eyes on the rooftops of Avengers Campus because Black Widow is bound to make appearances whether it’s taking on the menacing Taskmaster in Avengers Assemble or patrolling the campus, you won’t want to miss her!

Also, through the end of the month, Natasha Romanoff herself may be spotted wearing her latest snow suit from the film while prepping for a winter escapade. Now, where can I get a matching one?!

Disney’s Hotel New York – The Art of Marvel recently opened at Disneyland Paris, immersing guests in New York City’s culture and vibrant energy while celebrating Super Heroes and their stories. Make sure you discover the amazing Black Widow artworks and references displayed in the hotel including a themed floor of the hotel with a commissioned mural by Lula Tolay and a Rubik’s Cube installation in the lobby.

Then head over to Walt Disney Studios and snag a selfie with Black Widow or grab a photo by an all-new Black Widow photo location backdrop by the future location of Avengers Campus!

Light Up The Night & Save the Day

Over at Shanghai Disneyland, state-of-the-art technology is woven into a performance of light and shadow in a fully immersive experience– ILLUMINATE! A Nighttime Celebration, the first nighttime spectacular to feature Super Heroes, including Black Widow!

At Hong Kong Disneyland, fans can experience a heroic encounter with Black Widow while she’s taking a break from her secret missions around the world at Expo Assembly Station.

In the action-packed spy thriller “Black Widow,” Natasha Romanoff, aka Black Widow, confronts the darker parts of her ledger when a dangerous conspiracy arises with ties to her past. Pursued by a force that will stop at nothing to bring her down, Natasha must confront her history as a spy and the broken relationships left in her wake long before she became an Avenger. Check out this featurette about Taskmaster, a calculating and formidable foe in the film, debuting first right here on the Disney Parks Blog:

Suit Up with Super Spy Gear

Suit up for your next mission with some epic new products including a special edition doll, sleek jacket with the Black Widow emblem and a limited edition pin set inspired by the film! These products are also available now at shopDisney.com.

Collectors, assemble! Fans of Pop! won’t want to miss the latest from Funko including Black Widow aka Natasha Romanoff, Taskmaster and of course, Red Guardian and Yelena Belova, also available at retailers worldwide.

Aspiring Super Heroes can join forces with Black Widow and Yelena Belova to take on Super Villain Taskmaster in an armed helicopter! Not visiting the parks anytime soon? You’re in luck, this LEGO set is also available at retailers worldwide.

Those visiting Disneyland Resort can find these products at The Collector’s Warehouse in the ground floor of Guardians of the Galaxy- Mission: BREAKOUT! and at World of Disney in Downtown Disney District.

Headed to Disney Springs in Florida? Be sure to shop these products at Super Hero Headquarters and World of Disney! For a limited time, outside the AMC Disney Springs 24 DINE-IN Theatres, find special “red carpet” photo ops celebrating the release. And if you’re hungry for a bite, guests can enjoy the Black Widow inspired Burger and Milkshake at D-Luxe Burger in celebration of the film.

So, go ahead and get your super spy looks on and don’t miss “Black Widow” in theaters and on #DisneyPlus with Premier Access July 9. Additional fee required.