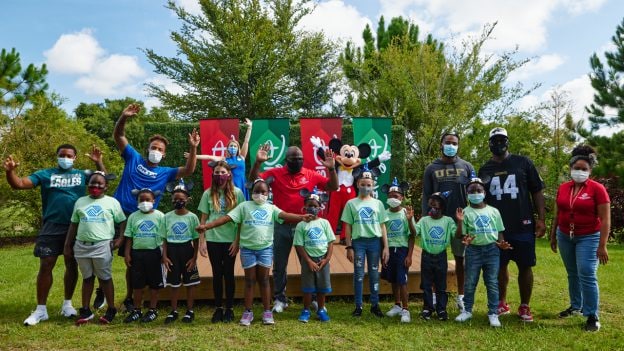 When Buffalo Bills and former University of Central Florida wide receiver Gabriel Davis was a kid, he didn’t always have the clothes or supplies he needed for going back to school. Now that he’s achieved his dreams of becoming an NFL player, Davis is giving back to his community in meaningful ways. This year, he’s partnered with other football players and Walt Disney World Resort to provide back-to-school backpacks to kids at the Walt Disney World Clubhouse of the Boys & Girls Clubs of Central Florida.

This week, Davis joined a few fellow NFL players, our Walt Disney World Ambassador Ali, and Mickey Mouse to surprise the kids at the Boys & Girls Clubs with the backpacks. Inside, the kids found apparel, gear, Mickey ear hats, and Walt Disney World lunch bags to help them prepare for the upcoming school year. Mickey also helped bring joy and magic to the moment – you could see and feel the kids’ excitement when he arrived!

Walt Disney World has a long-standing relationship with both the local Boys & Girls Clubs and the NFL, and was thrilled to be a part of bringing this joy to the kids. Walt Disney World consistently aims to inspire a world of difference through the power of stories, especially those like Davis’s and his mission to set kids up for success.

You can check out all the fun and magic of the moment here!