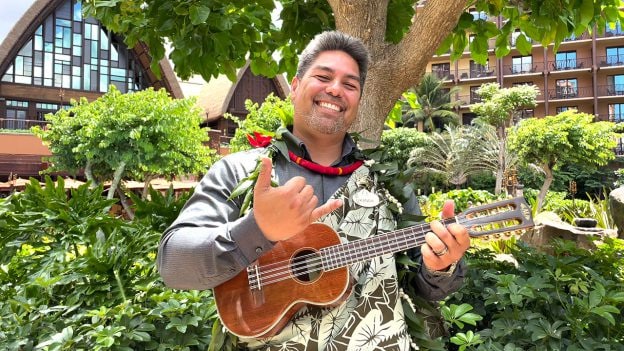 Aloha to the Next Disney Ambassador of Aulani, A Disney Resort & Spa

From performer, to resort leader and now Disney Ambassador, Kanoa Kawai will serve as the next Disney Ambassador of Aulani, A Disney Resort & Spa. The search for the next Disney Ambassador at Aulani Resort started earlier this summer as current Ambassador Alyssa-Lende Kane led cast members through information sessions, preparing them for the interview process ahead. Cast members from nearly every line of business applied, resulting in an incredible pool of applicants and a difficult decision as to who will ultimately serve the cast once Alyssa’s term comes to a close at the end of this year. After three rounds of interviews and activities, Kanoa Kawai was selected to wear the Ambassador pin to serve the cast of Aulani Resort in 2022 and beyond.

Kanoa joined the resort in 2014 as an entertainment performer before moving into a management role with Entertainment in 2019 and now with Food and Beverage. “Being a Disney cast member has changed my life and the direction of my professional career,” Kanoa shared, “I have the honor of being part of a company that makes dreams come true.” Kanoa hopes his time as Ambassador will give him the opportunity to “serve, lead and influence cast members” and his community. Always having a passion for mentorship, Kanoa hopes to be a positive impact on his cast around him.

While Alyssa-Lende’s ambassadorship may be coming to a close, a new journey is just starting, recently accepting a manager role at the front desk, where she will continue to inspire and lead her fellow cast members. After Kanoa’s selection, she continued the Aulani Resort tradition of presenting a makana, or gift, to the newly selected Ambassador. Alyssa-Lende presented, an ‘umeke bowl which intentionally has no lid for the stories to flow in and out of this beautiful vessel.

We can’t wait to see the wonderful stories Kanoa and Alyssa-Lende will write as they move into their new adventures. Hoʻomaikaʻi, congratulations!

For more cast stories make sure to follow the other Disney Ambassadors from around the world.

Likes (2)
Share Aloha to the Next Disney Ambassador of Aulani, A Disney Resort & Spa