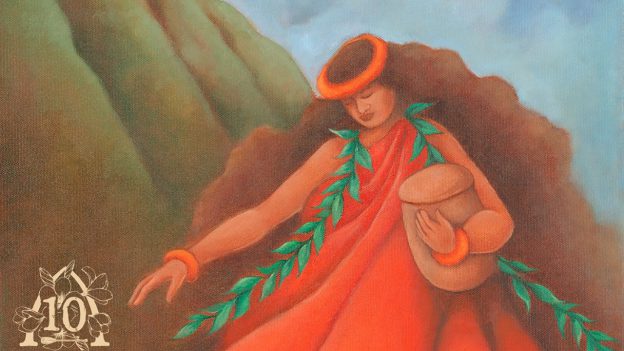 Music, on the other hand, has a special way of capturing an emotion. It has always played a key role in our storytelling at Aulani Resort, from the deep reverence of Keali‘i Reichel’s Music of the Maka‘ala, welcoming guests into the grand lobby, to Mele from Aunty’s Beach House, a collection of favorite Disney songs produced by Kenneth Makuakane and recorded in ‘ōlelo Hawai‘i, Hawaiian language, for all to enjoy throughout the resort.

To carry on that tradition of storytelling through music, ‘Aulani, Lei Hiwahiwa is a new mele, or song, created to honor the resort’s 10th anniversary. Written, performed and recorded by two of Aulani’s own cast members Angela Morales and Eric Lee, it’s an ode to the story of this special place – from its formation and it’s evolution and growth, to what it has become today and the ‘ohana who has given it life.

The talent found at Aulani Resort is remarkable. Angela and Eric, who embody the roles of Aulani’s Aunty and Uncle, are also award-winning music artists, and recipients of several Nā Hōkū Hanohano awards, the premier awards for Hawai‘i’s recording industry. When we all got together to talk about honoring Aulani Resort through music, it just felt right that they create and share this song for us.

We hope you’ll enjoy this mele woven especially for the ‘ohana Aulani, including all those who have been touched by this one-of-a-kind place.

Here’s a look at the making of ‘Aulani, Lei Hiwahiwa.