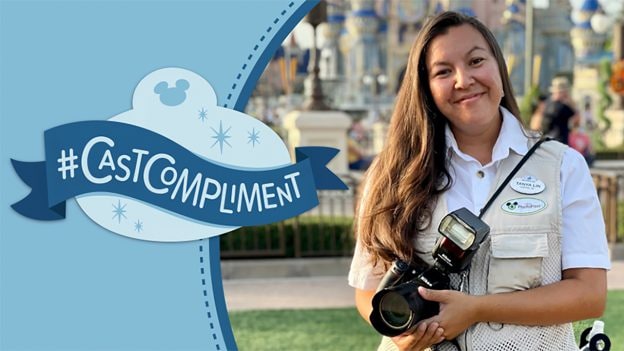 You ever hear a story that makes you stop and smile? You carry it with you the rest of your day because it was filled with kindness and the best of what humanity has to offer? Well, I’ve got one for you today.

Back in May, Walt Disney World Resort guest Bliss Welch visited Magic Kingdom with a dream of getting one of the iconic Mickey balloon Magic Shots as a keepsake of her trip.

Bliss has Limb Girdle Muscular Dystrophy 2B, and can no longer hold her arms straight above her head — the pose needed to achieve the coveted Mickey balloon shot.

Enter Disney PhotoPass Photographer Tanya. Bliss approached Tanya in front of Cinderella Castle and asked if she could capture some photos to commemorate her trip. Tanya eagerly agreed.

Tanya didn’t have anyone waiting in line to capture a photo after Bliss, so Bliss thought this was her chance to ask for something she’d never had the courage to ask for — the Mickey balloon Magic Shot. That’s when the magic happened.

Tanya proceeded to step back and kneel down to try to angle the photo. She was unsure if that was enough to guarantee a successful Magic Shot, but she knew this moment — this photo — was important.

After some special Disney magic and pixie dust, the photo appeared on Bliss’ My Disney Experience app — balloons and all!

“I knew she was going to be excited that we made that happen and I wished I could have seen her face when she saw the photo,” Tanya said.

A few months later, Bliss shared the story on Facebook and with the Disney PhotoPass team.

Naturally, when our cast members are recognized by our guests, we get really happy.

A few weeks later, Tanya was surprised at the beginning of one of her shifts with a recognition moment hosted by Walt Disney World Ambassadors Ali & Raevon, alongside Tanya’s leaders.

She was presented an award to commemorate her dedication to creating happiness for our guests and a thank you from the Ambassadors and her leaders.

“It is cast members like Tanya — the ones who embody courage and kindness — that inspire us each day,” Ali said.

And to absolutely everyone’s surprise, later that day Tanya reunited with a familiar and friendly face — Bliss!

“Truthfully, I was on the hunt for Tanya,” Bliss said. “I hoped our paths would cross again so I could thank her in person. To say it was a surreal moment would be a major understatement.”

Tanya and Bliss chatted all about the recognition moment earlier that morning, as well as how incredibly inspired each was about this special interaction. It ended with a keepsake photo both will cherish for years.

“Disney magic is so much more than a bundle of cute Mickey balloons,” Bliss said. “The true magic lies within the heart of each cast member.”

We encourage you to take to social media and share your stories of magical cast interactions using #CastCompliment.