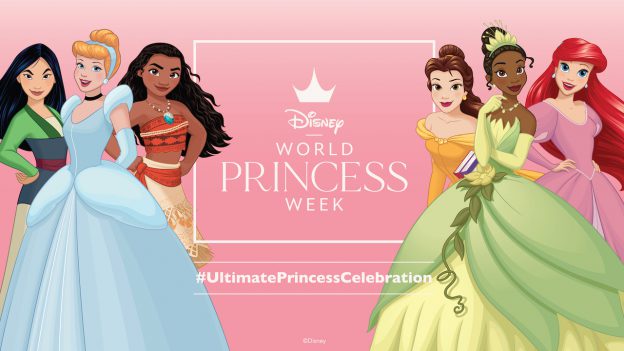 First-Ever World Princess Week Kicks Off Next Week: A Sneak Peek of What’s to Come!

Hopefully you’ve heard by now that Disney’s Ultimate Princess Celebration is underway. Well, I am thrilled to announce that—as part of the exciting festivities—next week we will kick off the first-ever World Princess Week! “What does that mean” you ask? Well, it means that we’re going to be sharing the latest on all new products, digital content, unique offerings from our parks and resorts, and more surprises! Here’s a roundup of how you can join in on the celebration next week:

Starting Aug. 23, there will be a new Tiana-themed playground available during the EPCOT International Food and Wine Festival! This playground is an awesome offering guests can enjoy during the kick-off of Walt Disney World Resort’s 50th anniversary celebration, “The World’s Most Magical Celebration, which begins Oct. 1. There will also be some sumptuous themed food and beverage offerings across Walt Disney World Resort, inspired by the 14 Disney princesses and “Frozen” queens all week long (check them all out here).  On Aug. 26, plan a visit to Disney Springs Marketplace with your own little princesses, who will be invited to take part in a Princess Promenade at the AdventHealth Waterside Stage. Taking place from 2-6 p.m. for one day only, costumes are encouraged, and guests will enjoy a princess-themed entertainment performance.

When you’re walking around Disney Springs, be sure to check out the latest Princess-inspired merchandise and snap a pic in front of the three art expression walls, themed to the “Tales of Courage and Kindness” storybook collection. Lastly, Movies Under the Stars at Walt Disney World Resorts will feature a line-up of Disney Princess movies, so you can get lost in your favorite fairy tales with some of your favorites you know and love.

Over at Disneyland Resort, Disney Princess Breakfast Adventures will return to Napa Rose at Disney’s Grand Californian Hotel & Spa on Aug. 26 … and reservations are now available! This magical experience is for princes and princesses of all ages, and I for one am THRILLED that it’s coming back … and not just because I’ve missed those chocolate princess cake pops so much.

Also, if you haven’t checked out the new state-of-the art audio and visual technology inside the updated Snow White’s Enchanted Wish, this is the perfect time to do it! This newly enhanced experience at Disneyland park tells the story of Snow White in a new way, and the attraction remains the only ride-through Princess attraction at Disneyland park. While you’re there, stop to wave hello to Queens Anna and Elsa as they ride on a float along Main Street, U.S.A., and on to “it’s a small world.” Enjoy the music from “Frozen” as they march on by!

The Disney Princess Half Marathon Weekend races go on sale on Aug. 24. Taking place during the magic of the Walt Disney World Resort 50th Anniversary celebration, the weekend features events for all skill levels, coveted regal medals and Disney entertainment. Be inspired by some of your favorite Disney heroes to reach new heights of courage and kindness that propel you triumphantly to the finish line that ends with happily ever after!

Entertainment, sweet treats, and extra surprises with the Disney princesses like Jasmine, Merida, and “Frozen” queens Anna and Elsa await you at Disneyland Paris! There will be new exclusive Selfie Spots and Magic Shots to enjoy and capture unforgettable royal memories. The resort will also have a special range of products celebrating World Princess Week in a selection of shops and restaurants. Visit disneylandparis.com for more information.

At Hong Kong Disneyland, you’re likely to see some of your favorite Disney Princess heroes. From August 23 through August 29, you may also hear the brand-new Ultimate Princess Celebration anthem “Starting Now,” sung by global superstar and Grammy Award-winning recording artist Brandy. You’ll be singing along before the song is over during World Princess Week at Hong Kong Disneyland!!

Over in Hawaii at Aulani, A Disney Resort & Spa, wave “aloha” to Moana, who set sail back to the islands just a few months ago. While you’re there, treat yourself to the Moana Dole Whip Fresh Fruit Sundae. It features DOLE Whip pineapple in a crispy waffle bowl topped with fresh pineapple, sprinkles and a white chocolate image of Moana. “Delicious” doesn’t even begin to cover this one! Little ‘Opihi’s also has a Chocolate Dipped Banana with Macadamia Nuts, featuring an image of Moana made of white chocolate. Yum!

In keeping with the spirit of the celebration, a range of new products will launch during World Princess Week from brands such as Enchanted Disney Fine Jewelry, Lokai and Love Your Melon, all of which emphasize kindness through charitable giving. Additional products from Hasbro, JAKKS Pacific, the LEGO Group, Funko, ColourPop Cosmetics and others will also hit retailers globally.

Get excited, because an all-new Disney Designer Collection Princess Doll from shopDisney.com will launch each month, with 12 designs, starting with Princess Jasmine in October. There are two new Disney nuiMOs plush characters: Ariel Disney nuiMOs and a new Jasmine Disney nuiMOs— the perfect additions to your collection of those fashion-forward plush!

Pandora Jewelry is celebrating too, with beautiful Pandora charms featuring Cinderella, Tiana, and Jasmine. Hand-finished in sterling silver with vivid pops of colors, these are the perfect accessory for World Princess Week and year-round!

World Princess Week is also being celebrated on the Blitz-tastic mobile game, Disney Emoji Blitz! To kick off the week’s festivities, they’re running a brand-new Pocahontas Villain event August 18-22. Then, be sure to log in on Aug. 23 to collect one FREE “Frozen” Emoji: Queen Elsa or Queen Anna! As you complete events and missions, you’ll automatically collect Princess Tokens all month long, which can earn you Disney Princess Emojis including Belle, Rapunzel, Tiana, Moana, Jasmine, Ariel and Cinderella! Download Disney Emoji Blitz now for free with in-app purchases on the App Store and Google Play.

New titles launching from Disney Publishing Worldwide include a rom-com reimagining inspired by Cinderella’s story called “If the Shoe Fits,” fifty delicious kid-friendly recipes in “The Disney Princess Cookbook,” and a holiday-inspired picture book called “12 Days of Princess.” Lastly, a hardcover deluxe storybook collection called “Tales of Courage and Kindness,” which features 14 original stories and artwork inspired by the iconic Disney Princesses and “Frozen” heroes, will be available for fans in early October.

In other Princess news, shopDisney’s Ultimate Princess Celebration Hotline will launch on Aug. 23, this time with all-new recorded messages from five Disney Princess characters who can be reached by contacting 1-877-70-DISNEY, and two “Frozen” queens, Anna and Elsa, who can be heard only by visiting shopDisney.com.

To wrap up the week of celebration, Disney Channel will unveil an all-new music special, “Disney Princess Remixed – An Ultimate Princess Celebration,” Friday, Aug. 27 (7:30 p.m. EDT/PDT). The half-hour special will celebrate the empowering attributes of Disney princesses and “Frozen” queens through reimagined performances of their iconic songs. GRAMMY Award-winning recording artist Brandy will also debut her music video for “Starting Now.” “Disney Princess Remixed – An Ultimate Princess Celebration” will also be available on Disney+ same day in select markets, including the U.S.

That’s just a sampling of what’s to come! Make sure that you’re following along daily on the Disney Parks Blog, TikTok, Facebook and Instagram channels, as well as the website https://disney.com/ultimateprincesscelebration, for the latest on fan-favorite Disney Princess news. There will also be the first-ever TikTok Live event from Aulani, a Disney Resort & Spa on Aug. 25, featuring an appearance from Moana in honor of the 10th anniversary of the resort.

Make sure to use #UltimatePrincessCelebration to join the conversation and here’s to the best World Princess Week ever!