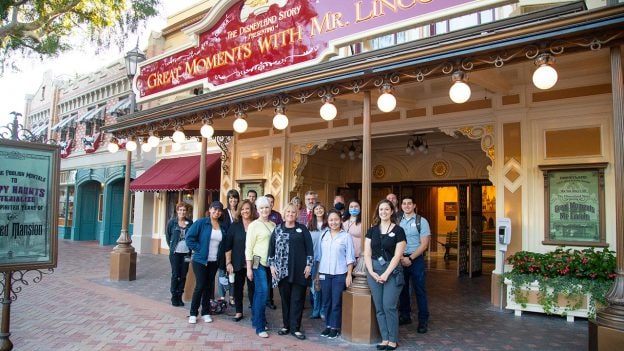 The day before her retirement, Mary Niven, senior vice president of Experience and Integration at Disneyland Resort, met a group of cast members as the sun rose over Main Street, U.S.A., for one of her favorite traditions during her 21 year-career: leading a tour that links stories of Disney icons with business, leadership and life lessons we can learn from today.

“If you look down Main Street [from Town Square], Sleeping Beauty Castle looks so far away—but as you begin to walk toward it, you realize it’s less than a block away. That’s because the Imagineers used forced perspective”—an optical illusion that makes the castle look larger and farther away than it really is, Mary told the group. “Life is a lot like that. You start out in your Disney career and it feels like you have so much time, but you turn around and it’s 30, 40 years later. That’s why I encourage everyone to live their lives with a kind of forced perspective—a clear vision of what you want to do and what you want to be known for.”

Mary originated the Heritage Tour more than a decade ago when she realized that some leaders didn’t feel connected to the history of the park. From the Windows of Main Street, U.S.A., she knew the stories held relevant lessons that could inspire today’s leaders. Several years ago, Mary expanded the tour for more cast members; her final tour July 29 brought together cast members from every part of the resort. Leaders in both parks say they will continue leading the tour for cast.

As the group moved down Main Street, U.S.A. before the park opened to guests, Mary stopped under just some of the many windows dedicated to Disney icons and shared their lasting legacies.

Bill Evans, the landscape architect who Walt hired to develop the distinctive landscape design, was in a hurry with a dwindling budget as opening day approached. At Walt’s suggestion, Bill looked up the Latin names of the weeds growing in the unfinished planters and displayed the names. “The first day, guests were floored with the flora on display,” Mary laughed. “It’s a great example of how when we see something that needs to be fixed or corrected, there’s always a solution.”

Xavier “X” Atencio was an accomplished Disney animator when Walt asked him to transfer to WED Enterprises (later Walt Disney Imagineering) in 1965. Soon after, Walt asked him to write music for two attractions—despite his lack of song-writing experience. The result? “Grim Grinning Ghosts” for Haunted Mansion and “Yo Ho, Yo Ho, A Pirate’s Life for Me” for Pirates of the Caribbean. “One of the great things about Walt was that he got to know the people he worked with and saw talents that maybe they didn’t know they had,” Mary said. She challenged the group: “Do you see the people you work with for the job they have today, or do you see them for their real potential?”

Walt was known for his storytelling genius, so he brought on his original Imagineer, Roger Broggie, for his technical expertise. Roger built everything from steam locomotives to the Monorail system. “Walt knew that he needed people who had very different skill sets. When you’re choosing people to work on a team, always look for people with different backgrounds, experiences and skills. It may take longer to get the group going, but the results will be so much better in the long run.”

Sherman Brothers (Richard and Robert) are celebrated for writing music for “Mary Poppins,” “The Jungle Book” and more films, along with the beloved ear worm: “it’s a small world.” But they were also a personal source of joy for Walt. “There were days when Walt would face challenges and it was hard for him to work, so he’d ask the brothers to come to his office and play his favorite songs. Before long, his mood would change,” Mary shared. “When you’re having a bad day, have that favorite place to go or person you know will brighten your mood with just a smile. The sooner you feel better, the more effective you can be.”

Ron Dominguez, who grew up on the orange grove-covered property that would later become the site of Disneyland, was hired in 1955 as a ticket-taker and rose to become vice president of Disneyland and eventually, executive vice president of Walt Disney Attractions. “All of us have a responsibility to make every new cast member feel welcome and help them,” Mary said. “You never know what kind of amazing talent they might have or the legacy they may leave.”

Chuck Boyajian, who Walt hired as the first manager of Custodial Operations, established a reputation for insisting on cleanliness, partly by initiating a policy that it’s the job of every cast member job keep the parks clean. “We had only four managers of Custodial in over 60 years; that kind of continuity is rare,” Mary noted. “Think about that when you plan a new initiative; how can it have a lasting impact?”

Imagineer Bob Gurr developed more than 100 designs for attraction vehicles—from Autopia to Matterhorn Bobsleds—even though he wasn’t a formally educated engineer. “The reason why he was so successful on cross-functional teams was because he asked great questions until he had the root cause of an issue or the best solution,” Mary said. “None of us can have all the answers, but we should know how to ask great questions—and know who has the answers.”

Jim Cora, who joined Disneyland as an attractions host in 1957 and retired as chairman of Disney International 43 years later, helped develop the foundational cast member training program. “Jim was a great mentor of mine,” Mary said. “I learned that no matter which Disney park you visit, our cast members are what make them special. They may not look the same or have the same life experiences, but there’s something special about them. Success comes when you take time to pick great people and give them great training and tools for the role.”

When Walt’s brother, Roy O. Disney, lined up meetings with potential investors for Disneyland, he needed a visual of what the theme park would look like—and fast. Walt asked his friend, artist Herb Ryman, to put Walt’s vision on paper. “I’m still amazed at how much that drawing looks like Disneyland,” Mary said. “It shows us the value of being able to clearly articulate our ideas—and the value of being a good listener.”

When Walt looked for investors, he went to TV networks to pitch a series based on Disneyland. Symbolized by the Acme Business College window, ABC negotiated a deal, giving Walt the funds he needed to build the park. “Nothing would get done without great partnerships,” Mary noted. “Don’t forget to thank the scheduler and the people who work hard every day to help you do your job.”

Walt asked sculptor Wathel Rogers to help develop the Model Shop and construct a 9-inch-tall figure of a moving, talking man. “At the time, it probably didn’t sound like the biggest project in comparison to other assignments, but that project led to the creation of Audio-Animatronics® at Disney parks, beginning with Great Moments with Mr. Lincoln,” Mary said. “It’s a reminder that no matter the project, there’s an opportunity for you to shine and make an impression.”

Jack Lindquist was the first advertising manager at Disneyland, and became the park’s first president. “He created some of the best traditions here, including the Ambassador Program and Grad Nites,” Mary said. “I once asked him how he got those ideas, and he said, ‘You always start with, what’s the business need? And then you design a program to support it.’” Mary said it was a lesson she draws from whenever cast or guests question why a beloved program is changing. “Heritage is our DNA, the essence of our brand, and that doesn’t change,” she said. “But traditions are the programs we create to support our heritage at a given time, and those need to adapt based on business needs. We always do it with sensitivity around our history, but we need to have courage to make changes when needed.”

The last stop of the tour was inside the Opera House, where we showcase a green bench from Griffith Park, where Walt would sit and watch his daughters on the merry-go-round and imagine a place where families could make magical memories together.

“This is my favorite place in the park,” Mary said. “But it’s not because it’s where Walt thought about Disneyland for the first time. It’s because we know he got up from that bench and invested everything he had, personally and professionally, in making that dream come true. And if we can come in every day and do something special for guests or fellow cast members, then Disneyland will be as relevant for people 60 years from now as it is today.”