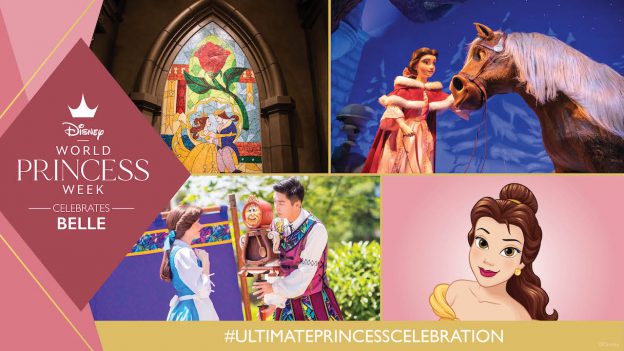 Today is the penultimate day of World Princess Week, and we are honoring one of my personal favorites: Belle! The intelligent, non-conforming daughter of an inventor, Belle adores reading. Different stories bring her to new places, introduce her to new people, and allow her to see new perspectives. She is confident and comfortable being herself, but she yearns to escape the simplicity of her life and find adventure beyond her provincial town. Learn where you can find Belle across our parks and resorts, and how you can celebrate this compassionate, loyal hero from anywhere in the world.

Settle in at a cozy French cinema at the Palais du Cinema at EPCOT for a 15-minute film featuring songs from the Walt Disney Animation Studios classic, “Beauty and the Beast.” It’s an enchanting twist on a timeless tale narrated by none other than Mrs. Potts herself—Angela Lansbury.

If you’ve always wondered what it would be like to enjoy a meal in the Beast’s enchanted castle, head over to Magic Kingdom Park and dine at Be Our Guest Restaurant. Feast on French-inspired fare in one of three themed dining areas: the Grand Ballroom (eat under the high, domed ceiling, surrounded by chandeliers and snow-laced Gothic arches), the West Wing (shhhh, it’s forbidden! You may spy the Beast’s enchanted rose here), or get swept up in the romance of Belle’s private library in the Castle Gallery, where you’ll also see larger-than-life figures of Belle and Beast dancing.

With “Beauty & the Beast Live on Stage” at Disney’s Hollywood Studios, you can relive the magic of a tale as old as time in a lavish Broadway-style musical. I don’t know what I like best: the breathtaking scenery, the bright and colorful costumes, or the delightful music we have all come to love. Over at Disney’s Grand Floridian Resort & Spa, it’s fine dining we suggest! So make plans to visit the signature lounge of Enchanted Rose, an elegant dining experience themed after The Walt Disney Studios live-action film. The bar itself glows from the light of a golden chandelier inspired by Belle’s iconic flowing ballgown!

Delight in some casual fare with a dash of French flair at Red Rose Taverne. Tucked away in a quaint corner of Fantasyland, this fairytale eatery straight out of the enchanted countryside in the movie offers some tasty French cuisine. Stop by for magnifique quick-service meals that transport you to Belle’s provincial village. Don’t forget to try the grey stuff- it’s delicious! (no, seriously… IT IS: white chocolate cookies and cream mousse on a red velvet cake with a raspberry center!). You may see Belle herself at the Royal Theatre, too. Tell her, “bonjour!” When you’re walking around Downtown Disney District at Disneyland Resort, it’s hard to miss the larger-than-life Belle and Beast outside The LEGO Store, lovingly rendered in LEGOs! Stop in to check out the impressive displays and huge selection of LEGO products.

Fun fact: “Beauty and the Beast” is the largest and most ambitious production to ever hit the stage on a Disney ship! Based on the live action film (and even including two new songs adapted to the stage for the first time), this Broadway-style show on the Disney Dream is a can’t miss. It boasts more than 1,000 costumes, wigs, shoes, and accessories, as well as 14,500 Swarovski crystals, with an immersive set composed of giant LED walls and high-definition video projections of 23 different locations. And, for the first time for a “Beauty and the Beast” stage show, the use of innovative puppetry brings the enchanted objects to life. It’s a must-see when sailing aboard the Disney Dream.

After much anticipation, last year we revealed the largest expansion in the history of Tokyo Disneyland park, which included a “Beauty and the Beast” themed attraction, shops, and restaurants. You might find yourself spontaneously shouting out a window, “Bonjour!” as Belle’s village makes you feel like you’ve dropped into the beginning of the classic film. Enchanted Tale of Beauty and the Beast is the thrilling new attraction housed inside the Beast’s castle, where guests board magical cups dishes that “dance” in rhythm to the music from the film as the story is brought to life like never before.

Sept. 4 marks the 20th anniversary of Tokyo DisneySea, and to celebrate, there will be a new guided tour, “Discover the Magic (Enchanted Tale of Beauty and the Beast).” Guests will get to know the new attraction like never before, by hearing stories told by Cast Members and learning new fun facts and discoveries. When you’re finished playing in the park, immerse yourself in the magical ballroom where Belle and Beast had their iconic dance, or in the library where Belle would get lost in her favorite novels, when you stay in Disney’s Beauty and the Beast Room at Tokyo Disneyland Hotel. There are hints of Lumiere, Cogsworth, and Mrs. Potts everywhere you look. Who knew a hotel room could be so enchanting?!

Inspired by the 13 courageous stories of our much-loved Disney princesses and “Frozen” queens, Castle of Magical Dreams stands proudly as the centerpiece of Hong Kong Disneyland. Check out the tower that honors Belle’s story: The colors used to represent her are blue and yellow; blue for the dress she wears while strolling through her village and yellow for the iconic ballgown she wears while dancing with the Beast. The golden finial on Belle’s tower depicts the enchanted rose from Beast’s castle, and the blue dome features a golden embossed, book icon pattern that symbolizes Belle’s passion for reading. French flourish patterns also decorate the tower, paying tribute to her heritage.

Stop by the selfie spot at Walt Disney Studio in Animagic Theater for a photo with Belle. On Le Pays des Contes de Fées, you’ll set off on a voyage to magical miniature lands, where you’ll see Belle’s village. She sits at her well, reading a book to the sheep, just as she does in the song “Belle.”

Over at Shanghai Disneyland, watch in awe as a troupe of talented storytellers brings Belle and Beast’s beloved story to life in Fantasyland. What could be better than humor, music, and puppetry?

While staying at Shanghai Disneyland Hotel, entertain your taste buds with a fun-filled feast at Lumiere’s Kitchen. The flavorful fare practically dances off your plate, and you might see Lumiere himself, as well as Mrs. Potts, Belle, and all your other favorite characters from the film! Don’t miss the beautiful statue on display of Belle and Beast’s iconic romantic waltz while you’re there.

Our new Princess Loungewear collection launched on Monday, just in time for World Princess Week. Celebrate Belle’s sense of adventure with her aspirational slogan, “I want more than this provincial life” with a comfy Belle velour sweatshirt available on shopDisney. You can also dress in flair when you sport Cogsworth, Lumiere, Belle, Mrs. Potts, and Chip on a Be Our Guest tie-front woven top from Her Universe, available on BoxLunch.

Find adventure in the great wide somewhere when you wear a Belle Lokai, a bracelet that carries elements from the highest and lowest points on Earth, reminding you to find balance. Then, find out what happens after Belle’s “happily ever after” in the YA novel The Queen’s Council: Rebel Rose. Will your favorite part be Chapter Three?

To round out the celebration of all things Belle, tune into the sixth episode of the Courage and Kindness Club and learn about celebrating our differences with Belle herself! Download Belle’s Culture Explorer Game and learn while you play.