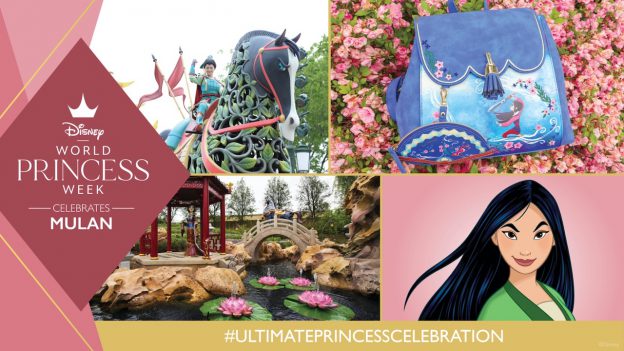 As we jump into the second half of World Princess Week, we celebrate the fierce Mulan! Mulan blossoms in the face of adversity and proves her worth outside of her tradition-bound society. She becomes a legendary warrior. Through courage, passion, and determination, she defies the odds and proves that anything is possible when you believe in yourself. Check out where you can find this courageous hero across our parks and resorts, and how you can honor her at home, too!

At Shanghai Disneyland, all aboard Mickey’s Storybook Express for a train-themed parade! Led by Mickey Mouse, this extravaganza is loaded with fantasy, fun, and music. Watch Mulan ride on her beloved Khan as she ventures off to defeat the Huns. On Voyage to the Crystal Grotto, travel on an enchanting excursion, where you’ll drift past beautiful sculpture gardens featuring characters from “Mulan.”

You can also watch Mulan in Mickey’s Storybook Adventure, a brand new live theater performance now showing at Shanghai Disneyland. After the show, dine in the Mulan-themed room at Royal Banquet Hall!

What’s better than a Hollywood-style awards show? A Disney-themed one… at sea! “The Golden Mickeys” — a dazzling tribute to enchanting Disney animated movies aboard the Disney Wonder and Disney Dream — pays tribute to Mulan’s legendary heroism and fierce determination during an action-packed production number performed to the fan-favorite anthem “I’ll Make a Man Out of You.”

Over at Walt Disney World, Mulan can currently be seen as part of the Royal Princess Processional at Magic Kingdom Park, so keep a lookout for her! If you’re visiting EPCOT, you may also spot Mulan in the gardens of the China pavilion in World Showcase.

I hope you’ve heard by now that Disney Princess Breakfast Adventures has finally returned to Napa Rose at Disney’s Grand Californian Hotel & Spa. In between courses of this exquisite brunch, learn some fierce warrior’s poses with Mulan!

When Hong Kong Disneyland kicked off its 15th Anniversary celebration last year, it unveiled the Castle of Magical of Dreams, which was the first time in any Disney theme park that a castle shifted from being representative of only one Disney Princess to featuring multiple. Architectural elements that pay tribute to Mulan’s story include an embossed cherry blossom motif with gold accents on a rose gold dome. Her tower also features jade corners and architectural ornamentation in the form of crossed golden spears, symbolizing Mulan’s heritage and fearless, warrior spirit. The golden finial on top of Mulan’s tower features her faithful companion – the dragon Mushu, proudly and playfully using the finial as a gong.

Younger fans of Mulan will love A Place for Mulan, a stylized picture book that tells an all new, original story based on the world and characters of the live action “Mulan.” And what kid wouldn’t want to know what Mulan was like as a little girl? They can find out in Disney Before the Story: Mulan’s Secret Plan. The older set of bookworms and history buffs will want to lose themselves in The Queen’s Council: Feather and Flame, a “Mulan” reimagining that blends the story with real history.

Every hero needs to take her essentials with her on the go. That’s why the Danielle Nicole Disney Mulan For Honor Mini Backpack, a BoxLunch exclusive, is the perfect companion. It features a striking graphic of Mulan posed with her sword, surrounded by flowers and wind. Order yours now! Then, check out the Mulan Classic Doll. It’s fully posable, so she is ready to strike a warrior’s pose at any given moment!

Join Mulan in the latest episode of the Courage & Kindness Club, and learn about all the hard work and discipline it took her to train to be a hero. Break out those craft supplies and download Mulan’s Crests of Honor craft!

Both the Walt Disney Animation Studios classic “Mulan” and The Walt Disney Studios live-action “Mulan” are streaming now on Disney+, so watch them tonight as you honor this fierce warrior. See you tomorrow as we celebrate another princess, whose nose is often stuck in a book …