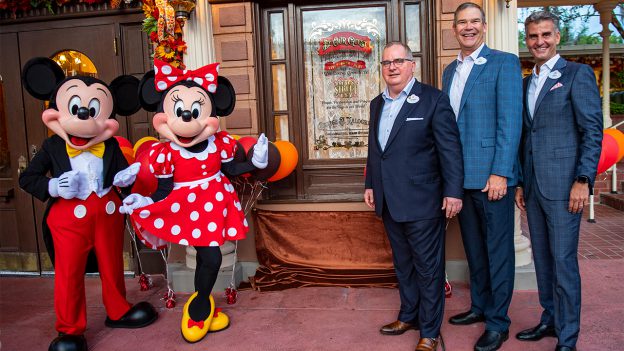 A Window on an Amazing Career

In my first role at Walt Disney World, my office was above what is now Tony’s Town Square Restaurant, in Magic Kingdom. During breaks, my leader and I would walk on Main Street, U.S.A. and he would point out the windows advertising the owners of fictitious businesses—everything from music schools and detective agencies to modeling agencies and fence painters. The businesses are fictitious, but their owners are real; exceptional individuals who helped shape the legacy of Walt Disney World. A “window on Main Street” has long been, and still is, our ultimate compliment to such exceptional cast members.

We confer new windows very rarely. Yet, on September 12, we dedicated a window to a Disney leader beloved on three continents—and one that we at Walt Disney World still cherish as “one of our own.”

Just like me, George A. Kalogridis grew up in Winter Haven, FL. He started with Disney in September of 1971 as a busser at the Disney’s Contemporary Resort. He was pretty sure it would just be temporary employment—something with which to work his way through college. Half a century later, he is still with Disney. His leadership roles, which include presidencies at Disneyland Resort and Walt Disney World Resort, have all been within what is now the Disney Parks, Experiences and Products segment.

George has had a hand in many things during his career, like the creation of Disney Pin Trading, and the memorable “Frozen Summer Fun” at Disney’s Hollywood Studios. He led the resort during a period of remarkable growth and opened Pandora—The World of Avatar, Toy Story Land and Star Wars: Galaxy’s Edge; experiences which have become staples of a Walt Disney World vacation. Today, in addition to being president of Segment Development and Enrichment, George is also Global Ambassador for the 50th anniversary of our resort. These accomplishments have been nothing short of legendary, and now there’s a special spot in the Magic Kingdom that pays tribute to the person behind them.

Next time you’re at the Magic Kingdom, I hope you’ll slow down and look at the windows on Main Street, U.S.A. Not just George’s, but all of them. The extraordinary contributions of the people on those windows are part of what makes Walt Disney World Resort “The Most Magical Place on Earth.”