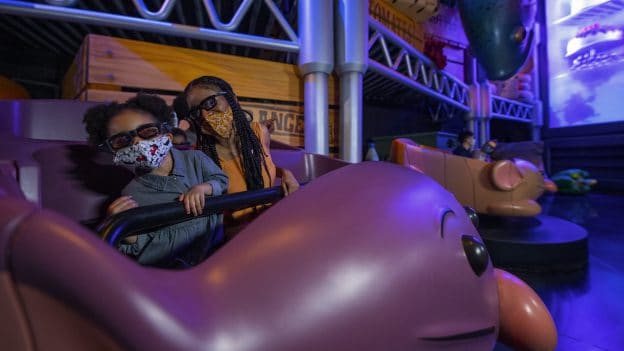 All in the Details: Remy’s Ratatouille Adventure and the France Pavilion Expansion at EPCOT

Hello Disney Parks Blog fans! I’m Joe Vitale, Senior Production Designer with Walt Disney Imagineering, and I’m excited to be making my Disney Parks Blog debut with new images and immersive design details to share from Remy’s Ratatouille Adventure and the newly expanded France pavilion at EPCOT! Opening soon on Oct. 1 to help kick off the Walt Disney World Resort 50th anniversary celebration, this spinning, whirling, family-friendly attraction invites you to shrink down to the size of Chef Remy on a thrilling chase through Gusteau’s restaurant, complete with sights, sounds and smells for an exhilarating “4D” experience.

As the production designer on this project, I helped to ensure our Imagineering team delivered on the creative vision for this new mini-land, while overseeing design, production and installation. Over the last few years, we had the pleasure of watching this attraction literally rise out of the ground, and it’s always an unforgettable experience for us as Imagineers to be this close to opening a project and seeing the excited reactions of cast members and guests as they experience it for the first time.

As part of the historic transformation of EPCOT, this expansion nearly doubles the size of the existing France pavilion and delivers on the design intent of World Showcase by celebrating real countries and the fantastic stories they inspire. There are so many wonderful authentically French and “Ratatouille”-inspired details that our designers incorporated throughout, and I’d love to share some of those with you here today!

Walking from the existing France pavilion into our new mini-land, you’ll find a beautiful allée along the water, designed to evoke the feeling of a Parisian park beside the river Seine. As you take a stroll along this path, made to look like the decomposed granite often found in parks and gardens throughout Paris, be on the lookout for rat motifs in the railing and cast-iron benches that begin to hint at the world of Chef Remy awaiting you around the corner.

Continuing down this path and turning onto the new Allée des Marchands (Alley of the Merchants), you’ll soon find La Crêperie de Paris, serving sweet crepes and savory buckwheat galettes. The restaurant features a traditional blue façade found throughout the Brittany region of France, which is both well known for its crêpes and the inspiration for our own eatery within EPCOT.

Beyond the crêperie, you’ll soon pass beneath an ornate, cast-iron arcade that creates a natural transition from our real-world celebration of France to Remy’s fantastic Paris, as depicted in Disney and Pixar’s award-winning film “Ratatouille.” Facades in this area feature a bolder color palette and exaggerated architectural details, evoking the whimsical world of Paris seen in the film.

Guests of all ages will enjoy exploring this corner of Paris and discovering details throughout. Like Chef Remy in his toque atop the fountain, or the illuminated Gusteau’s sign in the distance, hinting at the adventure that awaits within the attraction. Take notice of the manhole cover near the fountain, as you may discover an homage to the scene in the film where Remy is first brought to Paris through the sewers.

There are many fun nods to other characters from the film as well, such as these wine bottles in the neighboring storefront featuring the food critic Anton Ego. Eagle-eyed fans might recognize the significance of the vintages found on each bottle, as they relate to milestone years for the “Ratatouille” story. Nearby you’ll discover Chef Skinner’s scooter and Chef Colette’s motorbike, which make for a fun photo opportunity for fans of the film.

These intentional design details, large and small, help immerse guests in the story and set the stage for the experience within the attraction. You can discover these details and more when the expansion opens on Oct. 1, just in time for the beginning of “The World’s Most Magical Celebration!”

Likes (4)
Share All in the Details: Remy’s Ratatouille Adventure and the France Pavilion Expansion at EPCOT