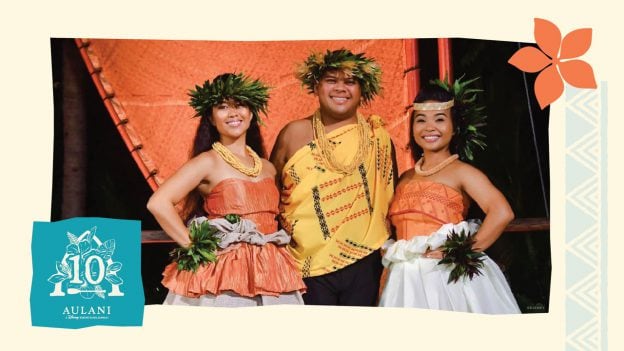 A short time ago, during a live moment celebrating the 10th anniversary of Aulani, A Disney Resort & Spa, we debuted a new mele or song, “‘Aulani, Lei Hiwahiwa” written and performed by two of our very own Aulani cast members: Angela Morales and Eric Lee. You can add this song to your music collection as it’s now available for download on Spotify or iTunes.

“‘Aulani, Lei Hiwahiwa” is meant to be a tribute to the place that our cast members hold dear, and to the people – our own ‘ohana Aulani – or Aulani cast family – who have helped bring the resort stories to life. Angela was part of Aulani Resort’s opening team; and she and Eric welcome and entertain guests at Aulani Resort as “Aunty” and “Uncle.”

Nearly 400 of Aulani Resort’s current cast members were part of our opening team in 2011. Our cast members are the heart of Aulani Resort and they help create the moments that guests will cherish for a lifetime. To celebrate our cast and the release of this beautiful new ballad, we’ve created a music video starring our Aulani cast members. Do you recognize any of your favorite cast members?

Mahalo nui loa – thank you very much – to the entire cast of Aulani Resort! The past 10 years of memories were made possible because of you.