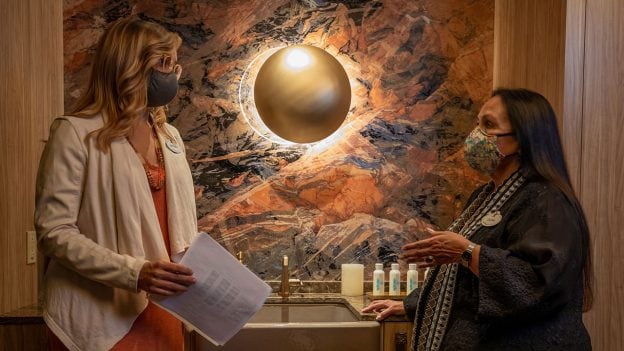 Look around Tenaya Stone Spa and you can’t help but feel the tranquil beauty of California’s Yosemite Valley. Natural elements are everywhere, from the wood rounds in the flooring and décor of agate and quartz crystals to a chandelier made of old tree roots hanging in the boutique. A closer look at the design details of the spa, opening Sept. 16 at Disney’s Grand Californian Hotel & Spa, also reveals a deep appreciation and respect for the indigenous cultures of the region.

Dawn Jackson, a Native American cultural advisor at Disney, began working on the project as an Imagineer on the Story Development team. Now an associate in Corporate Brand Management, Dawn played a significant role in bringing Tenaya Stone Spa to life and continues to serve as an internal cultural resource on projects at Disney that include Native American representation. Dawn could not have imagined the cultural advisor role she would eventually play at the company when she began working in creative development at Disney Stores in 1993. At the time, Disney was working on the film “Pocahontas,” and Dawn’s team was developing the product lines, referencing Great Plains tribal beadwork and Southwestern iconography.

Dawn, a member of the Saginaw Chippewa Tribe, is from Michigan, and her tribe shares the same Algonquin language base as Pocahontas’ tribe, the Powhatan Tribe in Virginia. “I remember thinking, ‘I’m not sure we are representing the Native people of Virginia of that time period correctly in our product designs.’” Dawn did her own research and put together her own style boards for her leaders. “I didn’t even know if anyone would look at them, but I said, ‘this is my culture and this is what I know,’ and that’s how it all started. That was 28 years ago, and it has just grown from there.”

Dawn’s role as a resource expanded to Native American community outreach nationwide while continuing to advise on Native American-related content and products at Disney, from movies and merchandise to games and now, a spa at the Disneyland Resort.

In 2018, Katrina Mosher, an art director at Walt Disney Imagineering, connected with Dawn’s team while working on updates to Disney’s Grand Californian Hotel & Spa; she wanted to incorporate a Native American-inspired storyline that guests would feel during their experience. As they worked together on the spa, Dawn and Katrina created a design philosophy inspired by tribal teachings on wellness and balance. “In my tribe, a life well lived means it is in balance in four areas of one’s life: social, spiritual, emotional and physical,” explained Dawn. The theme of the natural order of four is represented throughout Tenaya Stone Spa: four main colors (white, red, black, yellow); four stones (white magnesite, red pumice, black obsidian, gold pyrite); four indigenous medicinal plants (sweet grass, sage, cedar, tobacco); and special signifiers to mark the four directional points of the spa: north, south, east and west.

Dawn met with various tribal contacts and friends who introduced her to contacts in the Yosemite Valley, whom she later learned were direct descendants of Chief Tenaya of the Ahwahnechee Miwok people. These relationships provided Dawn and Katrina with a deeper appreciation of the tribe’s culture, which is reflected in the spa’s design and décor.

For instance, white magnesite, previously used as a form of currency by some California tribes, represents “earth” — one of the four main elements. The spa’s music, from a Native American singer, was selected to pay homage to indigenous musical stylings. In the center of the spa is the Tenaya Stone itself: a stone gifted from the descendants of Chief Tenaya.

Dawn hopes that cast members and guests feel a connection to the spa’s storyline and is proud of her role in shaping its authenticity. “No matter what the product is, I think we have a huge responsibility to tell stories thoughtfully and authentically because we have the ability to shape peoples’ perceptions of different cultures,” Dawn said. “In my Native community, one of the most respectful things you can say to someone is ‘you did it in a good way.’ It means you did it with a pure heart and the right intentions and approached it with respect. That’s the best compliment you can give, and I want Disney to continue to do things in a good way.”