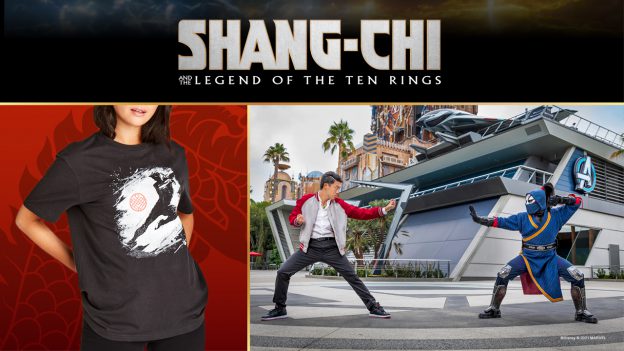 Can you feel the excitement in the air? Today is opening day of “Shang-Chi and The Legend of The Ten Rings.” This action-packed new film stars Simu Liu as Shang-Chi, who must confront the past he thought he left behind when he is drawn into the web of the mysterious Ten Rings organization.

While you’re making plans to see the movie, in theaters everywhere today, get drawn into your own journey with T-shirts, accessories, and toys– available on shopDisney and at Disneyland Resort Backlot Premiere Shop featuring Avengers Campus at Disney California Adventure park and Super Hero Headquarters at Disney Springs.

A visit to Avengers Campus at Disney California Adventure park puts you in the middle of the action, surrounded by heroic encounters with some of the universe’s greatest Super Heroes… and the occasional villain. You never know who you might see. Starting this week, you may run into Shang-Chi himself, hanging out with recruits on campus. And there’s a distinct possibility Shang-Chi could cross paths with Death Dealer, his former mentor and high-ranking master of martial arts in the mysterious Ten Rings organization. These two never underestimate one another, knowing full well the power and skills each other possesses.

Capture all the action of the film with this high-style graphic design T-shirt, available at Disneyland Resort, Walt Disney World Resort, and on shopDisney. Super Heroes need to stay hydrated, so drink up with this stainless steel tumbler with straw, emblazoned with the movie’s logo. Dress to impress and stay warm in a pullover sweatshirt with a neon-look emblem inspired by the film, too.

Kids and adults alike can master the style of the powerful Shang-Chi with a red and black jacket featuring a diamond pattern inspired by the icon on his armor in the film. The adults’ jacket is available at Disneyland Resort, Walt Disney World Resort, and shopDisney, while you can get the kids’ jacket on shopDisney! With ribbed cuffs, a high collar, black trim, and the embossed diamond pattern and pieced accents, you’ll be a Super Hero with Super Fashion.

If you’re making a trip to the parks, pick up a mineral wash women’s T-shirt with a vintage neon-look graphic design, or—for the younger set—a heathered jersey kids’ T-shirt with screen art. Both are at Disneyland Resort Backlot Premiere Shop featuring Avengers Campus at Disney California Adventure park and Super Hero Headquarters at Disney Springs, but they’re also on shopDisney if you’re not visiting the parks any time soon.

Relive all the excitement of the movie with this 321-piece LEGO set! It includes characters, an SUV, two motorcycles, and more—available at the LEGO Store in Downtown Disney District at Disneyland Resort and Disney Springs, as well as on shopDisney.

Make sure to check out the movie this weekend. There’s no better place to see it than at Disney Springs AMC 24 where you can snap a selfie on the red carpet with photo ops outside the theater for a limited time through September 12. Don’t miss it!