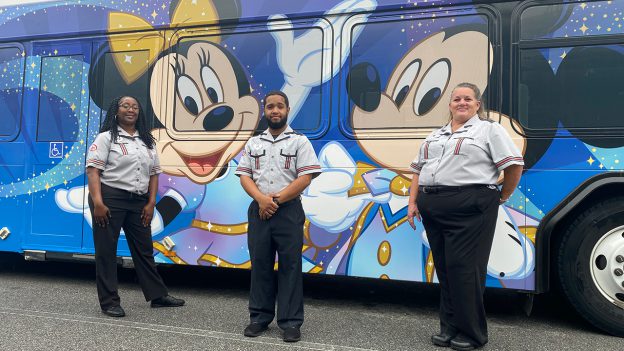 Cast members are the heart of the magic at Walt Disney World Resort — each one having a special role in “The World’s Most Magical Celebration,” beginning Oct. 1. Our Transportation cast’s role is one rich in heritage.

To commemorate this milestone, Transportation cast members across Walt Disney World were amongst the first to get to see the new 50th anniversary bus, Disney Skyliner gondola and monorail wraps. Their reactions to these surprises were heartwarming to say the least.

Transportation Maintenance Mechanic Roderick said that working on the monorails is something he never thought he’d be doing. “It’s been a real enjoyment in my life. Now seeing the new wraps out of our workshop and ready for guests — it’s a big privilege.”

“It is always fun to help guests pick out their favorite gondola,” Disney Skyliner Host Alexandra said. “I know which one I’ll be showing them!”

“I’m so excited to be a magical bus driver during the 50th celebration,” Stacy said. “I’m most looking forward to picking up not just our guests, but our fellow cast members in the new EARidescent bus.”

Whether arriving by boat, bus, monorail or gondola, Transportation cast members have always been one of the first teams guests see before even stepping foot in a theme park. It is with that sentiment that we celebrate these cast members today and every day for their commitment to making the magic move.

Head to the @WDW.Ambassador Instagram to watch these cast members’ candid reactions to the Walt Disney World 50th anniversary transportation wraps being revealed.