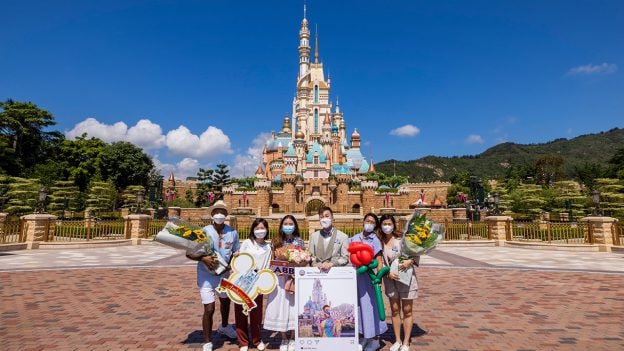 The search for a new Ambassador has remained a long-standing tradition for Disney Resorts ever since it was introduced by Walt Disney himself back in 1965. As the 2022-23 selection process continues around the world, the six finalists here at Hong Kong Disneyland Resort have been busy getting creative in the build up to the big announcement on September 9!

Each of our finalists – Abbie, Angela, Best, Lily, Shanty and Tony – were tasked with putting together their own videos to showcase the magic of Disney for guests from various places of origin. In true Ambassador spirit, they created their own interesting storytelling concepts, wrote their own scripts and of course played the starring role in their own videos; resulting in six wonderfully diverse videos from six diversely wonderful finalists!

You can take a look at each of the videos below and see for yourself which countries and places our finalists chose to represent. And see who you think will become the next Ambassador at Hong Kong Disneyland Resort!

Abbie Chan (Operations and Experience Integration)
Riverboats are one of the most common public transport methods in Thailand. And at Hong Kong Disneyland, guests can try it too thanks to Adventureland’s Jungle River Cruise! But Abbie is on the lookout for what makes this riverboat journey much more adventurous than you might expect. Jump on board to discover some lesser-known cultural details along the river!

Angela Lam (Entertainment and Costuming)
Just like the city of Hong Kong itself, our resort pulsates with diversity from all walks of life. And Angela is on a mission to bring out those heartbeats through various dance forms, music styles and locations around the park. Get on your dancing shoes for a toe-tapping trip around the resort’s cultural focal points!

Best Porkaew (Hotel Operations)
As a host at Hong Kong Disneyland Hotel, it’s where Best feels most at home. And to celebrate becoming an Ambassador finalist, some of his friends prepared a special gift! But there’s a catch – they’ve also set up several challenges around the hotel before he can get his surprise… Let’s see if he succeeds in his quest!

Lily Chan (Human Resources)
Over at Grizzly Gulch, Lily has her own challenge to undertake. She needs to complete tasks in true Korean fashion by finding out the secrets of the valley’s legendary gold. It’s your chance to learn some of the lore behind this western wonder – and maybe even some Korean along the way!

Shanty Cheung (Entertainment and Costuming)
Indonesian explorers will feel right at home with Shanty as their tour guide! She’s on the lookout for Tarzan among the tropical vegetation and luscious trees. Can she find him?

Tony Dick (Entertainment and Costuming)
Hong Kong Disneyland has always held close ties to its friends in Japan, and Tony has taken it upon himself to learn some of the cultural aspects and Japanese influence around the park! Let’s see how much of an influence Japan has had on his work.

For more cast stories, be sure to follow the Disney Ambassadors on social media: