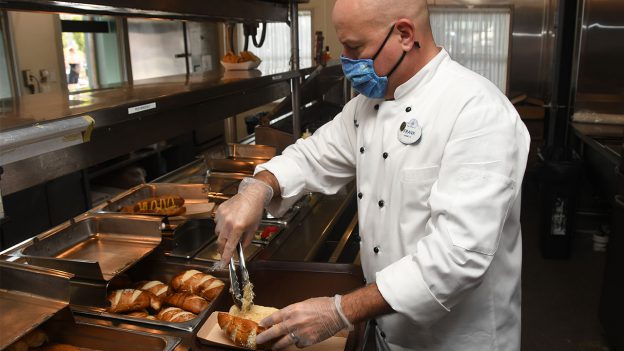 As a first-generation Cuban American growing up in a multi-generational household, Frank Vega helped his mother and grandmother in the kitchen from a young age where he learned how to cook traditional Cuban meals. Eventually, Frank discovered that cooking was his passion, so he enrolled in culinary school and set his sights at working at Walt Disney World Resort.

Frank began his Disney journey at Disney’s BoardWalk Inn, where he prepared Mediterranean-style meals, something new and different for him. While the flavors were similar to the Cuban cuisine he was used to making at home, Frank found the experience of crafting dishes outside his Cuban culture to be enlightening and rewarding.

“Being a chef is a perfect way for me to share my Cuban heritage,” Frank said. “Food has always had a special meaning to me, and sharing unique flavors with my fellow cast members and guests is truly an honor.”

After 18 years at Disney, Frank has worked in many locations across the resort and continues learning something new from each team. Now, as a sous chef at Disney’s Hollywood Studios, Frank brings together his culinary skills and background to work every day by inventing new menu items for quick service restaurants across property.

His latest creation, a Columbian Hot Dog found at Fairfax Fare at Disney’s Hollywood Studios, is one of the special culinary delights available for visitors in honor of Hispanic Latinx Heritage Month now through Oct. 15. This unique take on a hot dog is topped with pineapple mustard slaw, drizzled with garlic cilantro “mayoketchup” (a fusion between ketchup and mayonnaise) and topped with crispy potatoes.

Inspired by his hometown of Miami, the dish pays homage to the restaurants Frank visited as a child. “We really don’t have boundaries when developing new recipes; we can be as creative as we want.”

Having more diverse and unique menu options, like the Colombian Hot Dog, is one way Frank hopes to spark curiosity and connect in our guests to different cultures. “Food brings us closer together,” Frank stated. “It brings out stories of tradition and heritage that unite us all in a fun and exciting way.” Visit the resort to try this and other dishes as part Walt Disney World’s “Together We Are Magia” celebration across property.