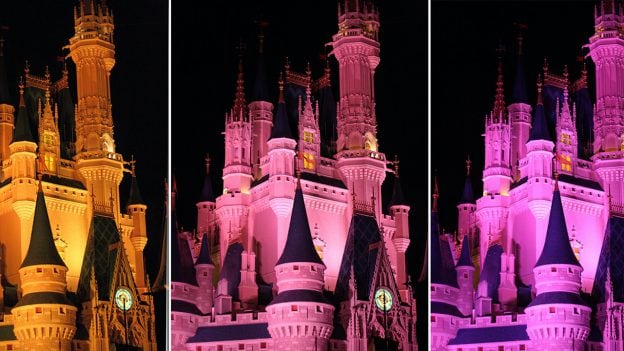 I’ve lost count of the number of photographs I’ve taken of the magnificent Cinderella Castle in Magic Kingdom Park. Inspired by Walt Disney’s 12th full-length animated feature, “Cinderella,” this 189-foot-tall structure is the crown jewel of Walt Disney World Resort. For the upcoming “World’s Most Magical Celebration,” the castle has received a royal makeover, with a new color scheme that includes bold, shimmering and regal enhancements. Today, I’d like to journey back to the beginning with a look at Cinderella Castle throughout the years from archives.

Guests visiting the Walt Disney World Preview Center before October 1, 1971 were treated to Herb Ryman’s gorgeous rendering (also found on a postcard). When I worked at the Casting Center in the late 1990s, I was thrilled to see the original castle model displayed in the lobby.

Originally painted in traditional colors of grey, blue, and gold, the castle represents a romantic conception of a French palace-fortress. While the base of the castle resembles a medieval fortress typifying the Romanesque architecture and castles of the 11th through 13th centuries, the upper portion of the castle reflects the stately Gothic forms that were prominent in later centuries.

Cinderella Castle took approximately 18 months to build and was completed around July 1971. Unlike traditional castles constructed in Europe, this castle is made of concrete, steel, cement, plaster, and fiberglass. No bricks were used in the construction.

When my parents visited in 1974, my dad took this fantastic image of the castle from Swiss Family Treehouse in Adventureland.

I snapped this image during my first visit in July 1983. There are 13 gargoyles on the outside of Cinderella Castle, and there are 18 towers with their corresponding spires on the castle.

Disney Legend Blaine Gibson sculpted the columns with birds and mice found along the walkways curving around either side of the forecourt. He also sculpted the “Partners” Statue on Main Street, U.S.A. and the Cinderella Wishing Well Statue located on the walkway between Fantasyland and Tomorrowland.

Cinderella Castle was magically turned into a birthday cake for Walt Disney World’s 25th Anniversary. I started my Disney career in the summer of 1997, so I have very fond memories of this celebration centerpiece.

It was estimated the cake weighed in at 40 million pounds. With 55,040 tablespoons of pink paint in three different shades, this cake was rich enough to satisfy any sweet tooth with its 50 gumballs, 30 lollipops, 4 Life Savers, 12 gumdrops, 16 red candy hearts and 16 green candy stars.

In 2005, the castle was decorated for Disneyland Resort’s milestone anniversary, complete with gold accents and a gigantic stained glass magic mirror that rotated with images of Disney Parks castles around the world. In the late 2000s, the castle appeared to be “dipped in sugar” as thousands of LED lights were added to celebrate the holidays.

I can’t wait to add more photos of Cinderella Castle to my collection, especially after receiving an EARidescent makeover for “The World’s Most Magical Celebration” beginning Oct. 1, 2021.