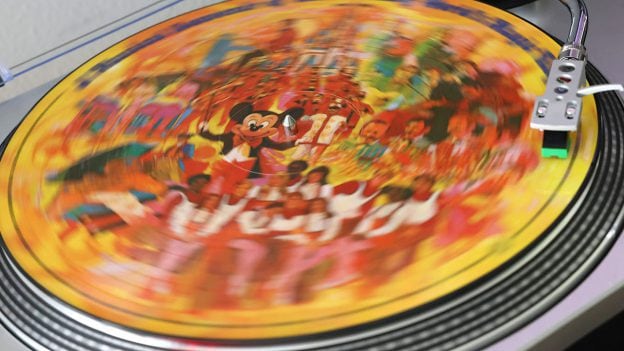 I love the music of Walt Disney World Resort. Theme park music transports me to places only Disney can create, and fill my mind with incredibly happy memories. It should be no surprise then that my library is overflowing with Disney tunes.

My parents purchased the “Official Album of EPCOT Center” following our first visit in 1983. After hearing the stirring opening strings of the “Main Entrance Melody” and the joyful “One Little Spark,” I was hooked on Disney music. My sister and I created interpretive dances for each track (luckily no video exists of those performances).

As a teenager, I remember falling asleep to the 1991 “Official Album of Disneyland and Walt Disney World.” I even wrote to Walt Disney Records asking for more unreleased music. My wishes would come true in the late 1990s when the make-your-own-CD kiosks called “Walt Disney World Forever” were briefly introduced at what we now call Disney Springs.

Fast forward to today, and I’m still collecting soundtracks. The image above contains a sampling of CD covers from my library. My most recent acquisition is a 1973 picture-disc titled “A Musical Souvenir of Walt Disney World’s Magic Kingdom” (seen in the first image). Gavin Greenaway’s magnificent score to the “Tapestry of Nations” parade at EPCOT is my favorite.

As a Disney cast member, I learned even more about the many individuals who created the soundtrack to my life. On windows above the Emporium on Main Street, U.S.A., in Magic Kingdom Park, you will spot two names – G. Bruns and B. Baker. These Disney Legends were instrumental in creating music still heard at Walt Disney World Resort nearly 50 years later.

Composer-conductor George Bruns was hired by Walt Disney to score the animated feature “Sleeping Beauty.” He also wrote “The Ballad of Davy Crockett” and provided music for films such as “Babes in Toyland” and Disney’s “Robin Hood.” For the theme parks, he contributed music to Pirates of the Caribbean and Country Bear Jamboree in Magic Kingdom Park.

And speaking of Magic Kingdom … I love this hidden musical surprise on Center Street, the side street near Uptown Jewelers: Listen carefully to hear singing lessons and the sound of a piano coming from a second story window!

Buddy Baker composed more than 200 scores for Disney motion pictures, television and theme parks, As musical director for EPCOT, Buddy supervised and composed music for the Future World pavilions and World Showcase. Among the attractions he scored were The Land pavilion, The American Adventure and “Impressions de France”; for the latter, he wove a tapestry of original music and classical works by French composers such as Debussy, Ravel and Satie.

With the nighttime spectacular “Harmonious” debuting at EPCOT on Oct. 1 to help kick off the 50th anniversary of Walt Disney World Resort, I know my love for Disney music will continue growing during the next 50 years. Coming soon, the Walt Disney World official playlist! Stay tuned in the coming weeks to listen to all your favorite Walt Disney World tunes in one place. And be sure to keep checking back here on the Disney Parks Blog as we cover all things 50th, and use #DisneyWorld50 on social platforms.