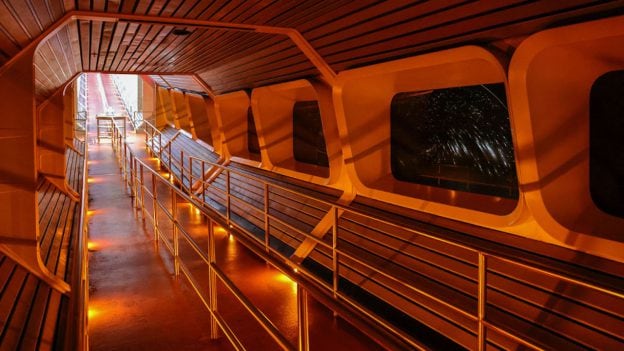 Do you have a favorite spot at Walt Disney World Resort? I have a running list of places special to me, from the Belle Vue Room Lounge at Disney’s BoardWalk, to the France pavilion in World Showcase at EPCOT, and so many more. At the top of my list, though, is the Space Mountain attraction queue in Tomorrowland at Magic Kingdom Park.

A Walt Disney dream inspired by the Matterhorn Bobsleds in Disneyland park, Space Mountain was officially announced on Oct. 21, 1972, during a press conference highlighting the second phase of development for Walt Disney World. New attractions, such as Pirates of the Caribbean and the Star Jets (known today as Astro Orbiter), and an expansion of Disney’s Fort Wilderness Resort and Campground were in the works. Construction on the mountain would begin soon after.

Long-time Walt Disney Imagineer and Disney Legend John Hench provided the conical design. It measures 175 feet tall and 300 feet in diameter. There are 72 beams encircling the sealed cone, each weighing 74 tons and extending 117 feet toward the top.

Inside, guests rocket through outer space on an out-of-this-world voyage, all controlled via advanced computer technology. A star-studded grand opening, attended by Mickey Mouse and several NASA astronauts, was held on Jan. 15, 1975.

I highly recommend the “Behind the Attraction” episode about Space Mountain on Disney+ if you’d like to learn even more about this icon found at Disney Parks around the world.

I rode the attraction only once with my father when we visited in 1983. During a return family trip five years later, I fell in love. Outer space fascinated me at the time, so the star tunnel queue, with its beautiful music pulsing through the air, was the perfect spot for dreaming about being an astronaut.

The beautiful music was composed by then-Imagineer George Wilkins, who had previously worked with Disney Legend Buddy Baker on the soundtrack for EPCOT. Wilkins’ optimistic Tomorrowland composition, titled “We’ve Come So Far (Promising Tomorrows),” was introduced during a mid-1980s update to Space Mountain. Variations are still heard today, and I am filled with hope every time I hear the music.

In the late 1990s, I discovered the “Walt Disney World Forever” kiosks in Disney Springs Marketplace, where guests could create their own CD soundtracks. The first one I made contained the Space Mountain music (“Star Tunnel” was on repeat while I wrote this story).

As we draw closer to the start of “The World’s Most Magical Celebration” on Oct. 1, it’s inspiring to look back at how Space Mountain was announced just one year after the grand opening of Walt Disney World. This iconic attraction helped deliver on the promise that Walt’s Florida dream would continue to grow and evolve into the future, a promise we will continue to celebrate as part of the resort’s 50th anniversary. Keep checking back with us here as we cover all the magic happening around this major milestone in our history.