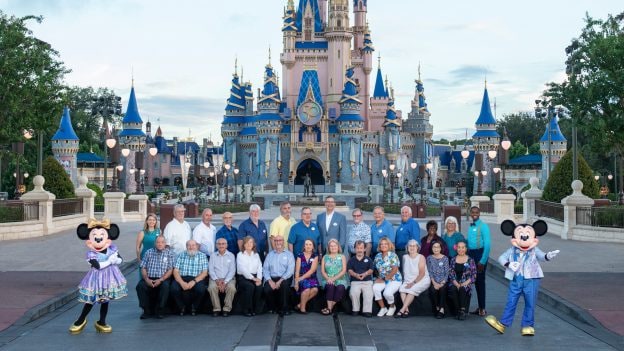 Cast members have always been at the heart of the magic at Walt Disney World Resort, creating timeless memories and magical moments for our guests.

As Walt Disney World Resort gets ready to celebrate its 50th anniversary, we are honoring the cast members who began their Disney careers at the very beginning, in 1971. Their contributions over the past 50 years mark a true dedication to creating magic for our guests and inspiring their fellow cast members who have had the honor of working alongside them.

To mark this historical moment, the “Class of 1971” cast members came together to celebrate ahead of “The World’s Most Magical Celebration” beginning Oct. 1.

During the special morning together, each cast member received a special keepsake of their new 50th anniversary EARidescent nametag and service pin, marking 50 years of continued service at Walt Disney World. They will be the first cast members to wear these new nametags over their hearts, creating a sense of pride among this united family of magic makers.

The “Class of 1971” were also gifted exclusively-embroidered Mickey ears from the new Walt Disney World 50th anniversary Vault Collection. Inspired by vintage ears from the Walt Disney Archives, these ears were only fitting for our longest-serving cast members, as they represent Disney’s rich history and heritage and pay homage to the year Walt Disney World first began and these cast members first started their Disney careers.

These cast members’ longtime dedication to the Walt Disney Company inspires us all. Walt Disney himself spent 43 years of his life building this dream, a milestone the “Class of 1971” have humbly exceeded during their careers.

Over the next several weeks, we will be introducing you to some of the “Class of 1971” and sharing their Disney journey stories. Keep visiting Disney Cast Life on the Disney Parks Blog to hear untold stories from the past 50 years from the cast members who were there.