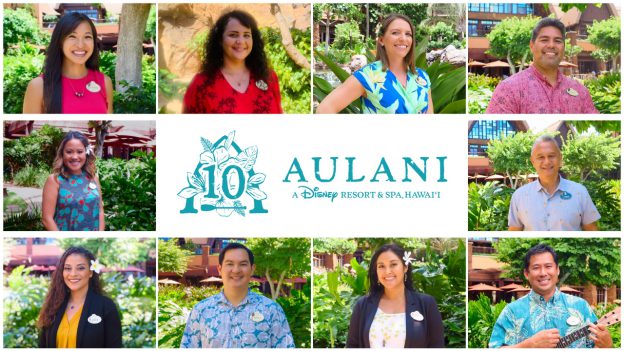 10 Cast Members Who Have Grown Their Careers at Aulani Resort

As we look back on ten spectacular years of making magical memories here at Aulani, a Disney Resort & Spa, we can’t help but notice how so many cast members have taken advantage of the growth opportunities available through a Disney career. Let’s take a closer look at ten of our own ‘ohana Aulani — Aulani cast family — and learn about how their careers have developed as part of their Disney journey.

“I get excited about my future because the possibilities are endless,” Stephanie said. “I am eager to discover what else I can do.”

Pua Valdez joined Aulani Resort in 2011 as a Front Office guest service manager and recently took on a new role as the Recreation area manager.

“After working in the Front Office for thirty years, I knew that change would help me on my journey and to reach my goals,” Pua said. “So, I challenged myself to make that significant change to Recreation this year.”

Amanda Gaviria joined the Aulani Resort cast in 2015 as a Recreation host.

“It has been a thrilling adventure,” Amanda said of her role in Banquets at Aulani Resort. “I have created magic for all sorts of guests through weddings, corporate meetings, KA WA’A Lū‘au, American Idol, and everything in between. No two events are the same, and I can still create those ‘only-at-Disney’ memories for our guests.”

Since Kanoa Kawai joined the cast of Aulani Resort in 2014 as an MC host, he’s grown his career through roles such as activities manager in Aunty’s Beach House and now as a guest service manager in Food and Beverage. In January, Kanoa will also become the next Aulani Ambassador.

“I’ve had the opportunity to work alongside the most outstanding performers and leaders. Aulani Resort is a unique Disney experience because of the mixture of Hawaiian culture and the aloha spirit,” Kanoa said. “It has been an honor to be a cast member at Aulani Resort.”

“Every new situation was a gift of a challenge, which allowed me to celebrate all wins in life, big or small,” Lendenly said.

In 2018, Lendenly moved to her current role as sales experience manager with Disney Vacation Club.

“I have learned and gained so much in my two and half years as a sales experience manager,” Lendenly said, “The cast members are my motivation. And with them, I am inspired to be my very best every day while never losing sight of the magic.”

“I wanted to be in a role that would be fun and challenging, and my role as Disney Vacation Club planning project associate gives me that,” Charles said. “I get to work on future projects and initiatives for Disney Vacation Club at Aulani Resort and globally as part of the Planning and Integration team based in Orlando.”

Jessa Brown joined the cast of Aulani Resort in 2011 as an entertainment performer and greeter.

“I thought it would be a fun summer job before I headed back to reality. But then I realized how important we were,” Jessa said of her role as a character performer and greeter. “It was then that I knew I wanted to create happiness for as long as I could.”

In 2018, Jessa became an entertainment and activities manager — a role she continues in today.

“Ultimately, my heart and soul are with the cast. After working beside them for so many years, I wanted to help in a new way, which meant going into leadership,” Jessa said.

“I got to come back home to Hawai’i and continue working in marine science at a beautiful ocean-side resort,” Raffy said about joining the cast at Aulani Resort in 2011.

“The Animal Programs team is part of the Entertainment department here at Aulani Resort,” Raffy said, “So I’ve had the opportunity to learn facets of entertainment that most marine scientists never get.”

Angel Samson joined the cast at Aulani Resort as a front desk agent in 2012, went on to be a core trainer for all new Front Office cast members, and in 2015 she became a Disney Traditions facilitator. In 2016, she took on a role in the Entertainment department as a youth activities manager. In 2018 she returned to the Front Office as a guest service manager — the role she continues today.

“Being a Front Office leader allows me to use my love for service and my spirit of aloha to create magic for our cast members and guests, and myself,” Angel said. “I get to be a part of long-lasting memories that bring our guests back every year, and I get to represent a fantastic brand.”

Daniel Hee joined Aulani Resort’s cast in 2011 as a telecommunications coordinator on the IT team. In 2013, he moved to the Entertainment department and began his current role as Adult and Family Programs manager.

“I get to see the smiles of our guests all day as we bring them together as a family in the Pau Hana Room with activities like Menehune Adventure Trail, Kāpala Kī’i (T-Shirt stamping), and ‘ukulele lessons,” Daniel said. “For me, there is no more significant accomplishment than doing something that makes another person smile.”