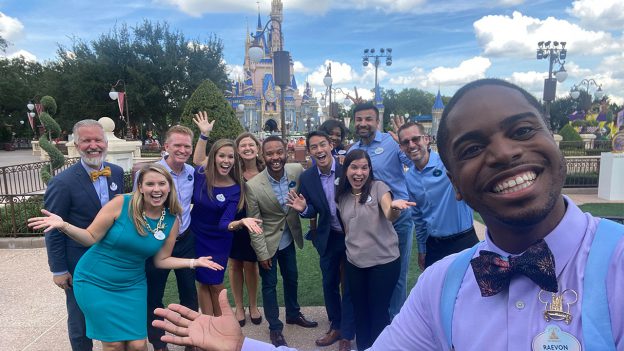 “I was part of the Ambassador team who celebrated 50 years of Disneyland and Disney theme parks around the world during the Happiest Celebration on Earth,” shared Rebecca Godsil, 2005 Disney Ambassador. “So being here all these years later with our ambassador family and celebrating this milestone anniversary is incredible.”

Ken Facey, 2017-2018 Disney Ambassador, said this celebration was more than just marking a moment in time – it’s about continuing a legacy that started many years ago.

“This celebration not only commemorates 50 years of this amazing destination, but it also recognizes the magic that cast members have made for millions of guests for more than five decades,” said Ken. “One of the best parts about being a Disney Ambassador is celebrating our cast members for creating unforgettable memories for so many, including me.”

For others like Vanessa Rosas, 2009-2010 Disney Ambassador, this magical celebration sparked a moment of reflection.

“I’ve been a cast member for 21 years, and to be here for this 50th anniversary is something special,” remarked Vanessa. “Everybody is full of excitement, from receiving new cast member nametags to seeing the beautiful Cinderella Castle adorned with ‘EARidescent’ decor. I can’t believe I get to be a part of this!”

Thank you to our Walt Disney World Ambassador alumni for helping us represent the resort for this historic celebration.