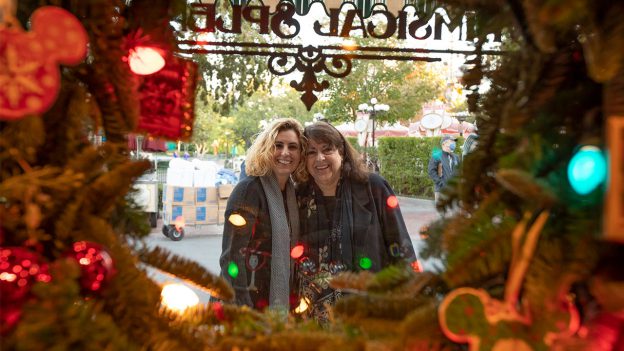 When Disneyland Resort Enhancement Manager Dawn Pipal-Keehne began working with her team on décor for Plaza Point — the new holiday shop on Main Street, U.S.A. at Disneyland park run by a fictional, well-traveled proprietor who loves all things Christmas — her thoughts kept drifting back to her mom, Evelyn.

“My mom just lives for the holidays; she’s an eternal child at heart and decorates the house for weeks before Christmas,” Dawn said. Her mother, who grew up in Puerto Rico, came to the U.S. with the traditions, recipes and stories that she would weave into the family’s festive Christmas celebrations in Simi Valley, California. As Dawn continued exploring the storyline created for the shop by Walt Disney Imagineering, “I kept thinking, this sounds just like my mom!”

Indeed, the Plaza Point proprietor is Miss Evelyn Toro, as evidenced by the nods to her and her Puerto Rican heritage subtly sprinkled throughout the shop. Best of all, Dawn managed to keep it a secret from her mom, revealing it to her in an intimate moment shortly before the shop’s official opening.

“I can’t believe this,” Evelyn Keehne (above, and in top photo with Dawn) said through tears upon seeing herself incorporated throughout the décor. “To see my Puerto Rican heritage represented here is amazing. When my father came back from the war, Puerto Ricans weren’t even allowed in stores or restaurants in New York City, so to see this at Disneyland, a place where everyone, and every child, can see it, well, that’s pretty amazing for all Latinos. I’d like to come here every day!”

As the shop’s fictional proprietor, Evelyn Toro (her maiden name) is edited into photos and illustrations from the early 20th century, depicting the shop owner’s travels around the world, during which she would collect unique pieces of holiday décor now used to decorate the store. Subtle nods include a statuette representing Three Kings Day, which Dawn grew up celebrating (also known as Epiphany), and a box of grass for the Kings’ camels that she would put by her bed. There’s a fictional Puerto Rican magazine cover with an illustration of her on the cover; plus plates of flan the real Evelyn is famous for, along with coquito, the coconut eggnog drink that’s generously poured for her guests during the holidays.

“If you look around the room, it’s all about her love of holidays, culture and diversity — and that truly is my mom,” Dawn said, recalling that her family’s door was always open to anyone who didn’t have a place to go for the holidays. “It’s a love letter from me to her for that inspiration and for making the holidays so magical growing up.”

Imagineer Kim Irvine said that having a real person inspire the backstory added an extra dimension while working on the project. “A backstory helps inform what the wallpaper may look like, the finishes, the color schemes, even the music,” she said. “And here we have this wonderful little Victorian lady who loved all the holidays and collected all these treasures from around the world to share with the people of Main Street, U.S.A. … Having Dawn’s mom as the inspiration makes it even more special.”

While Plaza Point showcases diversity and inclusion, Dawn acknowledges it was a challenge to decorate because of a lack of representation in authentic Victorian-era décor. As a result, Disney artists created nutcrackers, Santa Clauses and cherubs with various skin colors, and a window illustration showing two women holding hands while ice skating (see right, above). For Dawn, who is raising two children with her wife, the depiction is more than an acknowledgment of the LGBTQ community; it was a way to represent herself in her work.

“The beauty is that with us adding the Inclusion Key, it blew the door open for my team to talk about all of our own stories and how we can represent our own cultures in our work,” Dawn said, referring to the company’s priority on creating a workplace that encourages cast to be their authentic selves. “I don’t know if it’s that we just never felt permission to do that before, but this has been a fantastic journey.”