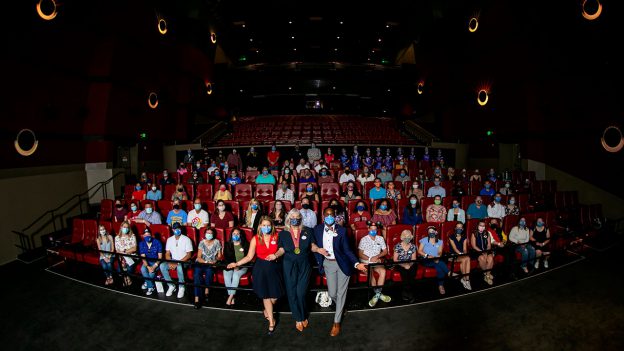 Connecting the Heart of the 50th Anniversary Celebration with our History

During a cast-exclusive presentation hosted by current Walt Disney World Ambassadors Raevon Redding and Ali Manion, Debby spoke with cast from across the resort, reminiscing on her Ambassador debut in Oct. 1970 and time with the company before that working as a hostess at the Walt Disney World Preview Center.

“It really felt like I was meeting Disney royalty,” Human Resources Specialist Frank said. “Debby has so many rich and wonderful stories to share… I am very glad I was able to experience this, and it will be a memory that will stay with me forever.”

Hearing stories that you might not be able to find in old newspaper or magazine clippings, many attending cast members were inspired by Debby’s journey and the impact Walt Disney World continues to have on her life – and her family’s life – to this day.

“It’s so fun because you know that one day when you’ve been with the company for 50 years, you’re going to have all these fun stories and pictures to look back on, too,” Attractions Hostess Taylor said. “Not only is it a treat to listen to other people tell their Disney stories and see their excitement about their memories as if they were happening yesterday, but you can also dream about what your Disney stories are going to look like one day.”

During a special meet and greet moment, one cast member was able to have their original copy of the LIFE magazine from opening day signed by Debby who can be seen smiling on the cover surrounded by fellow cast members and Disney characters.

“We’ve had this magazine framed on our wall for many years,” Engineering Services Carpenter Jessica said. “It makes it even more special now because I know who that was – I got to meet her.”

As hosts of the event, Ali and Raevon were equally as thrilled to spend time with Debby as they continue the longstanding tradition of the Ambassador program here at Walt Disney World Resort and lead us through The World’s Most Magical Celebration.

“Every day we put on our Ambassador pins, we are honored to continue Debby’s legacy,” Raevon said. “We would not be here today if it weren’t for the hard work and dedication of those who came before us,” Ali agreed.

To my fellow cast members – I’m excited to continue celebrating over the next 18 months and look forward to more cast-exclusive offerings like this one in honor of the 50th anniversary celebration.

I’ll take a line from Debby and leave you with this sentiment: You are Walt’s legacy. You are the heartbeat. You are what makes the magic for our guests.